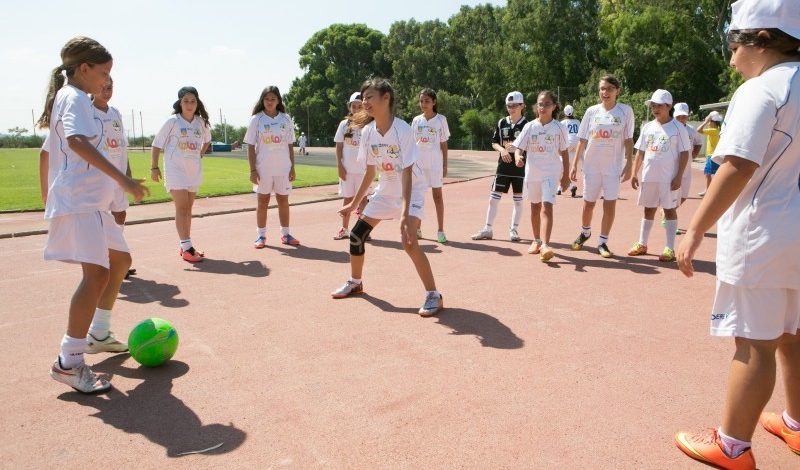 Young Jewish and Arab women and girls came together for a highly moving “Football for All” event on Wednesday 8th July to set the stage for next week’s UEFA European Women’s Under 19 Championship Finals in Israel.

The curtain-raising event for the championship finals was organized by NIF’s Kick It Out Israel campaign to combat racism and violence in football, in partnership with the Israel FA and English FA. The event was part of the “Football for All” campaign to promote women’s sport in Israel and joint living between Jews and Arabs.

The event in Netanya presented three girls’ teams, chosen from among the many teams that KIO Israel works with, to represent joint and equal society in Israel’s Arab and Jewish sectors – the girl’s teams from Maccabi Yefiya, Maccabi Kishronot Hadera and Netanya Girls. Maccabi Yefiya is based in an Arab town near Nazareth; Maccabi Hadera includes Jewish and Arab players; and Netanya Girls is a special project to promote excellence organized by the city’s municipality and the Athena organization to promote sports for women.

All three teams held a joint training session with the Israel and England Under 19 teams.

There was a remarkable sense of solidarity and sisterhood between Jewish, Arab and English women and girls, created by the event.

See here for coverage by The Jerusalem Post and The Jewish Chronicle.