Our 2015 Human Rights Awards Dinner will take place at the Grand Connaught Rooms on Sunday 8 November 2015. This year we are celebrating the work of Israelis who dedicate their lives to advancing a diverse, tolerant and truly shared society.

We will be presenting our Human Rights Awards to three exceptional leaders:

Samah, Eli, and Gadi’s work spans the breadth of Israel’s diverse communities, but each of them works tirelessly towards one goal: a more tolerant, more cohesive, vision of Israeli life. 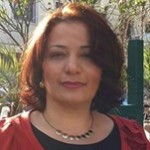 Samah is the founding director of Arab Women in the Centre (AWC), an organization that seeks to promote the status of women in Ramla, Lod and Jaffa. Established in 2009, one of the most important parts of AWC’s work is in combating gender-based violence and so-called ‘honour killings.’

A social worker by training, Samah writes a regular column in the online +972 magazine. She is a 2013 graduate of the Mandel School of Educational Leadership and lives in the shared village of Neve Shalom/ Wahat al-Salam.

Eli has been the director of Memizrach Shemesh, (the name means ‘the sun rises in the East’) since 2005. His achievements in this organization have been considerable: teaching and celebrating Mizrahi culture and heritage in the social and geographic periphery; encouraging leadership and social activism; and reclaiming Jewish learning and values-based education for the Mizrahi population.

Prior to this, Eli established the Ma’ayan Hahinuch Hademokrati, an organization which brings a moderate Mizrahi religious education to weaker neighbourhoods.

Although most of his work has focused on reclaiming the Mizrahi voice, Eli also effected huge change and growth in Israel’s Beit Hillel (Hillel House). In his ten year tenure as director he shifted its focus away from foreign students and strategically towards Israeli students.

Eli was born and raised in Bat Yam, attended school at Boyer in Jerusalem, and served as an officer in the IDF’s Golani troops. He lives in Jerusalem and is a father of three.

Gadi is the chairperson of Tag Meir, an organization that aims to combat racism and race-related crime in Israeli society. Wherever there is racism, and in particular religiously motivated racism, Tag Meir meets with those affected, building bridges between community leaders and increasing tolerance.

Tag Meir enlists support from across the Israeli spectrum, from secular through Reform and Conservative to Orthodox and Ultra-Orthodox.

Gadi is also the founder of Yud Bet B’heshvan, (the name commemorates the Hebrew date of Rabin’s assassination) a religious Zionist foundation that has established schools teaching the values of tolerance and pluralism. He holds a doctorate in animal behaviour.

This year’s Human Rights Awards Dinner coincides with the 20th anniversary of Yitzhak Rabin’s assassination. To commemorate his life’s work we are delighted to be welcoming his son, Yuval Rabin, who will be speaking about his father’s legacy during the course of the evening.

Rabin’s dream was for an Israel where all citizens live side-by-side, in peace, and with dignity. Our winners this year champion this vision of a harmonious and diverse shared society and embody what has been the working mission of the New Israel Fund since its inception.

In the wake of recent events and in light of what President Rivlin referred to as the ‘epidemic’ of racism in Israel, this work could not be more crucial.