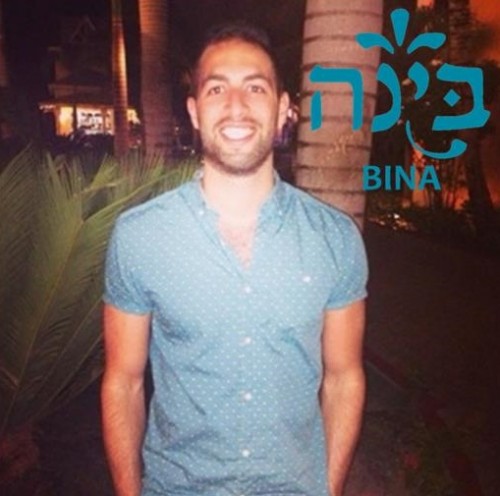 I urge you to support the growth of Israeli change makers working for authentically Jewish social justice by voting for BINA – the leading organisation at the intersection of Jewish pluralism and social action in Israel.

BINA strives to strengthen Israel as a democratic pluralistic society, by emphasizing Judaism as a culture, through Jewish values of Tikkun Olam (“repairing the world”). BINA means “wisdom” and it is also an acronym in Hebrew for “a workshop for the soul of the nation”: A phrase coined by Israel’s national poet Chaim Nachman Bialik.

The BINA Centre for Jewish Identity and Hebrew Culture strives to strengthen Israel as a just, democratic, pluralistic society, by emphasizing Judaism as a culture, through Jewish values of Tikkun Olam. BINA seeks to cultivate a generation of Jewish/Israeli leaders with strong Jewish identities, an in-depth familiarity with Jewish culture past and present, and who view social activism and justice central values by which to live.

I was lucky enough to participate on a BINA programme in 2012 whilst a participant on the Masa Tikkun Olam internship programme. The programme was run in partnership with BINA, and all of our learning was held at the BINA Secular Yeshiva building. I was struck by the power and uniqueness of what BINA was trying to achieve in building the links between modern secular Israelis, Jewish cultural heritage, and social action.

Three years later, the strength of the links that BINA has built speaks for itself. The growth of the organisation (even visible from the Tel Aviv campus’ move from the humble building by the bus station to a new beautiful home in leafy botanical gardens) has been remarkable; a testament to what BINA is successfully creating: an organic group of people doing social action in a consciously Jewish way.

The idea that positive change in Israel will come from within and not be imposed by outsiders has been said so many times that it has become an empty cliché. However, what is often left unsaid is the question of who these home-grown Israeli change makers will be. Having been involved with BINA for the past three years, I am confident that BINA provides an answer to that difficult question, and I urge you to support the growth of Israeli change makers working for authentically Jewish social justice by voting for BINA.

What will your donation go towards?

Some of BINA’s flagship programmes are as follows:

-BINA Bashchuna – “wisdom in the neighbourhood”, is a community-wide social action program operated by BINA in disadvantaged neighbourhoods throughout Israel, addressing the educational, welfare and cultural needs of impoverished communities

-BINA is a key program provider and content developer of informal Jewish education in public schools throughout Israel. The Center focuses on themes of Jewish pluralism, Judaism as a culture and Jewish social justice

-BINA is one of the first and few non-orthodox organizations in Israel to lead Jewish identity, Jewish learning, and Shabbat programs in the IDF.