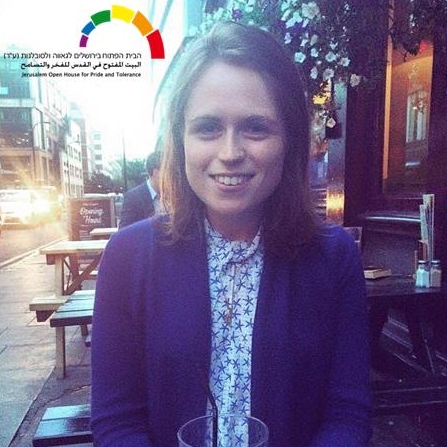 I am nominating the Jerusalem Open House because I believe that they embody the NIF New Gen values of freedom, equality, diversity, justice, education, tolerance, hope and love.

What is the Jerusalem Open House?

“In the days following the stabbings at the 2015 Jerusalem Gay Pride Parade, the Jerusalem Open House community centre operated in crisis mode, with staff responding to the media while providing a safe space for community members and support for the stabbing victims’ families.” – The Jerusalem Post

The Jerusalem Open House is a grassroots, activist organisation of LGBT people and their allies. It aims to provide direct services for the LGBT community in Jerusalem and to secure LGBT rights in Israeli society.

In their own words:

“When the JOH was founded in 1997, many were incredulous as to whether LGBT people even existed in Jerusalem, let alone whether they could sustain a vibrant LGBT centre. Much has changed since then. The JOH has firmly established itself in our city, becoming a leading LGBT service and advocacy organization with deeply committed volunteers, hundreds of supporters in Israel and abroad, and thousands touched by our message. Our annual Jerusalem Pride marches have become the largest human-rights demonstrations in Jerusalem, creating an important legal precedent for freedom of speech in Israel. We now run a wide range of programming such as free, anonymous, rapid HIV-testing, a thriving youth program, cultural events and holiday celebrations, all the while advocating for equality on behalf of the LGBT community in Jerusalem and Israel.”

This summer, while visiting Israel with NIF I had the profound privilege of hearing the testimony of members of the JOH. They turned to the organisation when they were at their most vulnerable and found understanding, acceptance and support. They now work as advocates to enable others to benefit from their experience. I am nominating the JOH because I believe that they embody the NIF New Gen values of freedom, equality, diversity, justice, education, tolerance, hope, and love.

What Will Your Donation Go Towards?

The JOH believes that the prevention of homophobic terror attacks lies in education.  As Tom Canning, JOH’s Director of Development told me:

“Many in Israel discuss the police failure in preventing the vicious hate crime at Jerusalem Pride, but we ask about the social failure in stopping homophobia. No amount of police can prevent the next homophobic attack. Only by entering every school in Jerusalem, changing hearts and minds, will we be able to make sure this never happens again.”

The money raised through Vote for Change will support JOH’s educational programme, which entails seminars for school staff that provide information and tools to support the needs and sensitivities of LGBT youth, as well as a programme for students on the LGBT community. The programme is also tailored for Orthodox schools where it is led by religious LGBT activists.

Vote for JOH now to help ensure that young LGBT people can live as full participants in their communities, free from fear, and that the tragedy of this summer will never happen again. Show them that UK Jewry stands in solidarity with them and supports their vital work, and donate now.