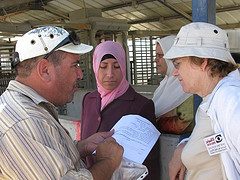 Machsom Watch is a volunteer organisation of Israeli Women peace activists who since 2001 have been observing and reporting on the occupation of the West Bank. They aim to influence public opinion by recording and authenticating the conditions faced daily by Palestinians, and ease their frustrations and hardships by helping wherever they can.

This question is a popular, universal and unfortunately somewhat timeless concept in ancient philosophy, fiction, and modern conflict and judicial overreach. When spoken in regard to Israel, it immediately reminds me of the documented behaviour of the IDF using what I believe to be unnecessary force, or unrestrained authority. This sort of behaviour is most often brought to bear on the Palestinian people, their homes, land and their livelihood, at checkpoints and during violent clashes in the West Bank.

What do Machsom Watch do?

The two most important activities of Machsom Watch are to report on check points all over the West Bank via daily observations, and also report on trials of Palestinians in the military courts. Freedom of movement and the right to a fair trial is some of our most important human rights. The courts are open to the public but are held in Israel, which means that many Palestinian families cannot attend a family member’s trial, let alone report on injustices, or ensure a defending lawyer is present.

Their other activities include helping Palestinians to discover the reasons they have been blacklisted, to apply for or reclaim an Israeli work permit, and negotiate the local Israeli administrations. It is often a long, complicated and disruptive process for Palestinians to navigate the Israeli administration system for simple things that are necessary to their livelihood. Finally, they work with the outside world by conducting tours for Israelis and foreigners to introduce them to the realities of life under occupation, and they distribute media to the rest of Israel and the wider world in order to focus attention on the realities of the situation.

Why are they only women? They are not a feminist organisation, but have found that it is both a positive way to give older women the power to contribute to enacting their politics, and it also has a significant social power.

Why Vote for Machsom Watch?

Machsom Watch struck a chord with me recently after hearing one of their members, Leah Shakdiel, speak recently at both the NIF Human Rights Awards Dinner and at a more intimate young adult’s evening organized by Yachad. As an organisation ‘against the occupation and for human rights’ they regularly provide an answer to this prominent question of ‘who guards the guardians?’.

The reports they publish are read by the IDF high command, and Leah herself said that there has been a noticeable change in the IDF’s attitude over the last few years due to their presence. Whether this can be maintained in the current boiling pot that is Jerusalem and the West Bank, time will tell. But by supporting them here through the Vote for Change initiative, and raising awareness beyond it, we can at least support from afar those who are watching the watchmen – holding the IDF and the Israeli Government to account for their actions.