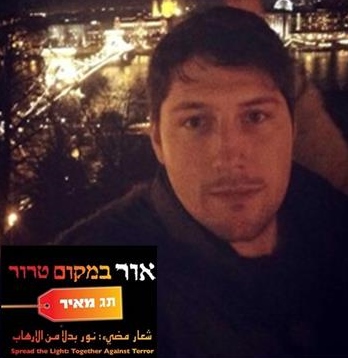 The work that Tag Meir do strikes to the heart of my value system—formed of human rights, democracy and equality—and represents what Israeli society looks like at its best.

Who are Tag Meir?

Tag Meir is a grassroots anti-racism coalition of organisations which aims to highlight and counteract the racism and violence of the Tag Mechir (Price Tag) attacks perpetrated by Jewish extremists against Arabs as revenge for government action against illegal West-Bank outposts or Palestinian terrorist attacks. Founded in 2011, Tag Meir has worked tirelessly to build a coalition of partners from across the Israeli religious/political spectrum to present a unified voice against racist violence and show solidarity with the victims. They also offer an avenue for Israelis to have their voices heard where it makes a difference, be it by the victims of attacks, the Israeli government or simply the wider Israeli public.

The work Tag Meir does is essential for Israeli democracy. They ensure that incitement, racism and violence are met with clear and unified opposition and encourage tolerance and dialogue over hatred and violence. Tag Meir’s underpinning values draw from the proud Jewish tradition of loving thy neighbour and tzedek chevrati (social justice). In light of recent tragic events, the work that Tag Meir does in bringing this discourse to the mainstream of Israeli society is more important than ever.

I recently had the displeasure of witnessing a Lehava march in Jerusalem: Lehava are an extremist right-wing racist organisation, whose members were implicated in the price-tag attack on the Hand in Hand bilingual school in Jerusalem. Hearing their racist rhetoric first hand only served to strengthen my conviction that Tag Meir are one of the most important groups working in Israeli society today.

What will your donation go towards?

Tag Meir is at the forefront of responding to ‘price tag’ attacks, and with your help, will continue to respond to such attacks, expressing solidarity with victims and demonstrating community-wide opposition to the horrific attacks which are becoming increasingly frequent.

When a Jewish-Arab integrated school in Jerusalem was targeted in an arson attack, Tag Meir mobilised dozens of activists who arrived at the school to show solidarity and speak out against the racist violence of the attack.

Just this past summer, they responded to the arson attack on the Dawabsha family home, organising a condolence visit and setting up a fund for the single survivor of the family.

Vote for Tag Meir now if you want to stand up to racism and demonstrate your commitment to Israeli democracy.