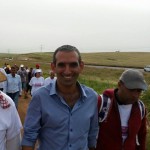 Avi Dabush is a dynamic and passionate activist and community organiser who is a leading voice on a variety of social and political issues in Israel. Raised in a national religious home in the Southern town of Ashkelon, Avi’s journey of activism and leadership has been bold and far reaching. He began by leading a vast coalition of NGOs and municipal bodies in a 13 year struggle which successfully prevented the construction of a damaging power plant in his home town. Through various roles at Shatil, Avi has organised, overseen and led many coalitions and grassroots campaigns on a broad spectrum of issues. From the struggle against poverty to fighting for workers rights and corporate social responsibility; from campaigns to protect beaches to demands for responsible urban planning, Avi and his teams have been at the forefront of grassroots social action over the last decade.

Avi lives in Kibbutz Bror Hayil, near Sderot. Last summer, Avi was one of the founders of the Movement for the Future of the Western Negev, which brings the voice of residents of the South calling for a political agreement between Israel and Gaza. In the last elections, Avi entered politics and ran for Knesset for the first time in the Meretz party. He reached number 8 on the Meretz list and was a leading voice in the party on issues of Mizrahi identity and social justice.

In his Kibbutz, Avi founded a “Social Action Beit Midrash” and leads his community’s synagogue. He is a proud husband and father of two, and a passionate advocate of veganism.