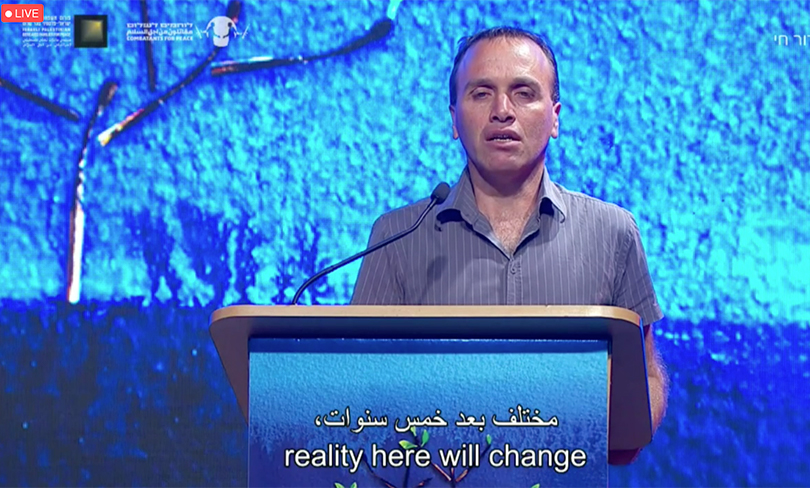 An estimated 200,000 people watched a virtual Israeli-Palestinian Memorial Day Ceremony held via Zoom app and broadcast from Tel Aviv and Ramallah. The New Israel Fund has been a long-time supporter and partner of this special event.

Despite fierce opposition from the government, and failed legal attempts to halt the event, the alternative Memorial Day ceremony has been held for the past 15 years by Combatants for Peace and Parents Circle – Families Forum.

Last year, 9,000 people attended the event in the two locations, but this year, due to the coronavirus pandemic, the event went online via Zoom and reached far more people than ever before.

UN Special Coordinator for the Middle East Peace Process Nickolay Mladenov sent special greetings. “We really need to see Palestinians and Israelis join together not only to fight the virus but also for peace.”

Hagai Yoel, from Kibbutz Ramat Rachel in Jerusalem, whose brother Eyal was killed in Jenin during Operation Defensive Shield in the Second Intifada said, “I refuse to be considered a traitor because I oppose the occupation. I refuse to be censored because I believe that peace is vital. I refuse to be condemned by society because it is clear to me that peace and only peace will bring about a situation of calm and let everybody who lives here lead a better life. I know that to settle a dispute both sides have to give up on something because if I take everything, the other side will be frustrated and desperate and that means constant war.”

Yusra Machfud, from the Al-Arroub refugee camp near Hebron, whose 14-year-old son Alla was killed by Israeli army gunfire said, “Despite the hardships I have experienced, I stand before you today with a message of hope. In the days after the tragedy that befell me, I had a great need for revenge. To do something that would quench the fire burning within me and I didn’t know what to do.”

“But meeting bereaved parents on the other side taught me that their pain was the same as my pain and the lust for revenge was replaced by an understanding that it would be better to strive for peace and not for the continuation of violence.”