A New Breaking the Silence Report: “The High Command” 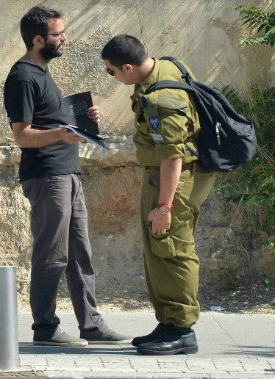 The report deals with three main aspects of the close relationship between settlers and the army: settler involvement in operational activity, a failure to enforce the law on settlers harming Palestinians or their property, and settler violence against IDF soldiers.

The report summary states: “Soldiers testify to significant settler involvement in, and influence on, IDF activities, as well as the obscurity or absence of explicit orders on how they are expected to act when faced with incidents of settler violence, theft, or destruction of property, which have become commonplace. Settlers often take advantage of the circumstances in order to determine facts on the grounds and initiate new procedures in the field in a way that serves their political, ideological and territorial interests.”

The report’s conclusion is especially troubling: “It is unfortunate to discover that the IDF’s senior command chooses not to address this misconduct and to disregard the testimonies provided by soldiers in the field.”

You can read the full report here. Elsewhere, NIF chair Talia Sasson published a column in YNet, in which she discusses the relationship between the settlers and the IDF in Hebron in the context of the Elor Azaria case.