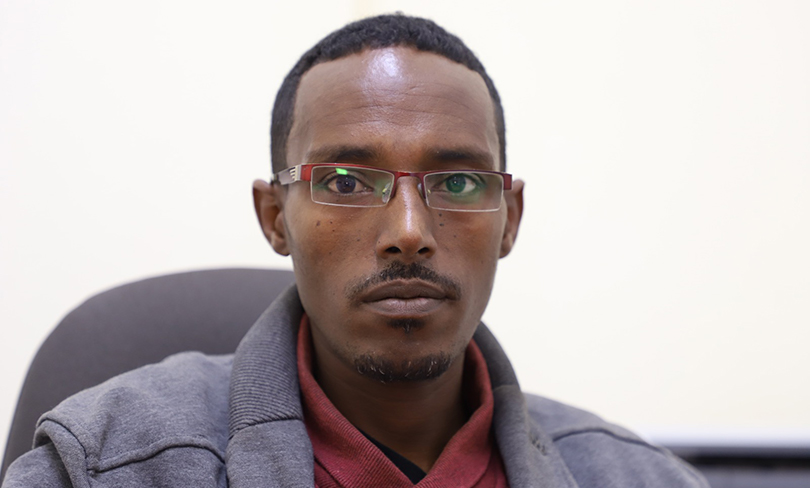 Aviran Henok lived through a dramatic and tragic immigration story that is typical for many Ethiopian Jews who immigrated to Israel in the 1980’s.

At the age of seven, he and his extended family left his mountain village in Ethiopia and trekked through dangerous territory, by night, for four months.

At one point, as they were riding in truck, atop 100-pound bags of honey and sesame seeds, the truck overturned. People fell out and were nearly crushed by weight of the cargo. Luckily, Aviran’s father, who had been tortured for helping other Jews immigrate to Israel, and three other men who had been standing at the edge of the truck and managed to dig most of the people out.

Aviran’s baby sister, who was being carried on his mother’s back, survived because her mother turned over when she fell (like many other Ethiopian Jews, Aviran’s sister later died of malaria while travelling through Sudan). Aviran survived that night with only a sprained ankle, but four of his family members died of suffocation.

On another night, an eight-year-old relative was kidnapped and to this day, no one knows what became of her.

In the four years Aviran spent in a tent in a Sudanese refugee camp, hiding his Jewish identity and pretending to be a war refugee with the rest of his family, he suffered from malaria, malnutrition, and other serious diseases.

“In Sudan, our neighbours were always testing us because of the suspicion that we were Jewish,” Aviran recalls. “One day, a neighbour told my father he was going to slaughter a bull and asked my father to come and take some of the meat. My father had no choice but to take the meat and bring it home. But even though we were hungry, he took that meat and dumped it in the ocean.

He also remembers people dying of hunger rather than eating non-kosher food. “Death was a daily routine,” Aviran remembers. “I still have nightmares.”

“Today, I would not say I’m religious, but, inspired by what my father did, I keep kosher. If in Sudan, we didn’t eat even when our lives were in danger from hunger, how could I eat non-kosher meat here in Israel? When I see bread in the street, I kiss it and put it aside.”

At the age of 14, Aviran left the yeshiva that the state had put him in because “they were telling us to forget who we were, to learn a new identity. I was very connected to my identity and I wasn’t willing to accept the idea that we are lesser Jews.”

Aviran transferred to a boarding school and wrote about Ethiopian Jewish traditions for his school paper.

“I’m very connected to who I am. Don’t change me. I’m not different. If I’m different, you are also different. The questions is, how do we live with all these differences?”

After all the trials and losses, the tragedies and pain that Ethiopian Jews suffered in order to reach the promised land that they had dreamed of for generations, they did not expect to be treated as second class citizens and face discrimination in Israel.

“We thought we were going to the land of milk and honey as described in the Bible,” Aviran says. “As children, when we’d see a plane overhead, we’d say, ‘they’re coming to take us.’ When we’d see a stork, we’d ask, ‘how is Jerusalem?’ When we’d ask, when are we going to Jerusalem, we were told ‘tomorrow.’”

Aviran helped organise activists in Bat Yam, where he lives, to promote the culture and civil rights of the Ethiopian Israeli community.

In the last 20 years, racism against Ethiopian Israelis has resulted in the killing of 13 young Ethiopian men by police officers. It was one of these killings – on January 30, 2019, of 24-yer-old Yehuda Biadga in Bat Yam, that turned Aviran into a national activist and a leader.

“I didn’t think something like this could happen in my hometown,” says Aviran. “I felt like the earth had opened and swallowed me. I didn’t think the racism, the profiling would cost lives. It’s no longer about quality of life but about the most basic right to walk in public and feel safe. It can’t be that a mother will be afraid to send her son to play outside.

“If in Ethiopia, we were chased because of our Judaism, how could it be that here it’s because of our skin colour? This reality cannot continue. When it rains, in the end, everyone gets wet.”

Aviran went to the police to secure a permit for the protest that brought 30,000 people into the streets of Tel Aviv after Biadga’s killing. Shatil and NIF assisted with transportation, legal advice, and other issues around the protest.

“After the protest, we asked ourselves, ‘what’s next?’ We knew we had to work with decision-makers and raise public awareness about racism. So we started a group called Young Leaders for Policy Change. Shatil’s Gidon Ambaya has been accompanying us from the beginning.”

“Shatil organised a training for us in which we learned everything we need to know to become a well-organised, effective leadership group. As we were working and starting a process, another youth was killed before his time by police because of the color of his skin: Solomon Teka (on June 30thin Kiryat Haim, a suburb of Haifa).”

With Shatil’s help, the group organised a public gathering with a panel of politicians to demand a state commission of inquiry into the killings and they are working to start lobbying in the next Knesset session.

“Sixty percent of our youth were born here. It can’t be that the colour of their skin determines if they live or die.

“I want to believe that we don’t have a racist society, rather, we have racism in our society and its every citizens’ obligation to fight it. It’s a crime against God because God is in every one of us – black and white.”