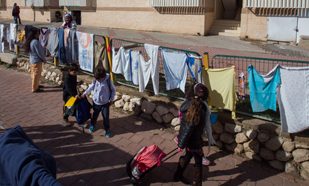 “The Public Housing Forum welcomes the intervention of the Bank of Israel in the public housing crisis,” said Shatil policy change expert Danny Gigi. “The Bank of Israel understands what we have been saying for years: that public housing is the key to solving multi-generational poverty in Israel. The Bank also adopted the two central recommendations of our struggle: to increase the number of public housing units available and to make the criteria for eligibility more flexible.”

In its report, the Bank stated that 37% of families that rent apartments spend more than 40% of their income on rent and “suffer from the excessive burden of the cost of housing.” Only in Spain and Greece – two countries experiencing severe financial crises – is the rental burden higher. The report was critical of government officials who for years ignored people’s need for public housing, cancelled apartment purchase grants (except to Ethiopian immigrants), and cut mortgage and rent subsidies in spite of the increasing cost of home purchases. The government’s housing aid was cut from more than four billion NIS in 2000 to less than half that much in 2014.

“The Bank of Israel’s statement is the result of heavy pressure exerted by the Forum and its member organisations during the election period,” said Gigi. “We are confident that the Bank’s position will help us to pressure the government to make the necessary changes in order to save public housing in Israel.”