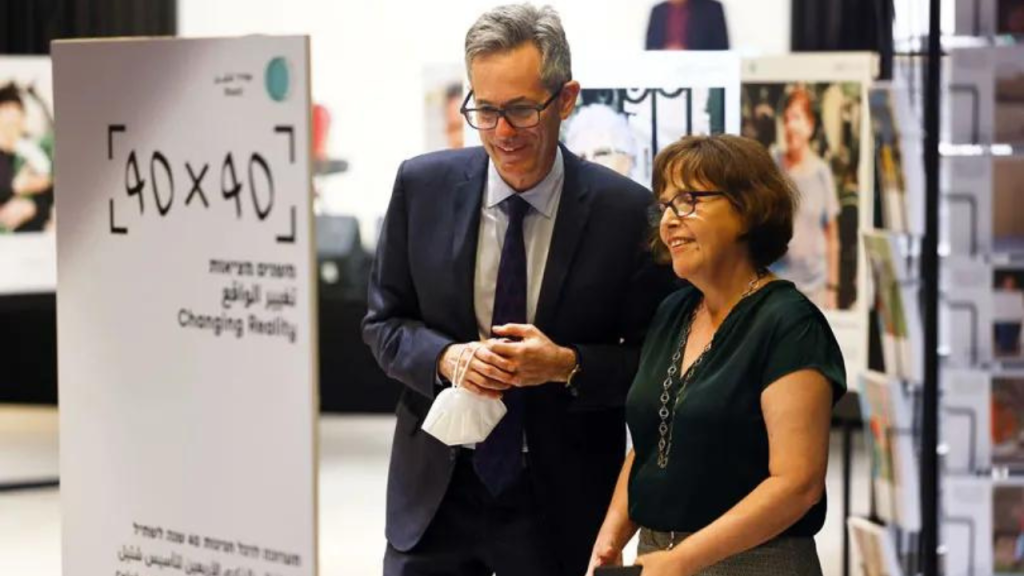 On June 28th, 2022, Shatil’s 40th anniversary celebration in Tel Aviv paid tribute to the faces and stories of 40 Shatil-guided activists.

40 years ago, NIF made a decision that changed the reality of 21st century Israel. NIF understood that to strengthen Israeli civil society, it was not enough to only raise funds and provide grants to social change organisations, but it needed to also create a network to support strategy and build foundations for these vital organisations.

NIF founded our action arm, Shatil, which over the past four decades has helped establish new organisations, worked to strengthen civil society and supported, and assisted and advised hundreds of socially-minded entrepreneurs and thousands of people. Throughout Israel — in the Galilee and the Negev, in towns and cities — Shatil changed how progressive change happens. The 40×40 Exhibition is a tribute to some of the key figures who brought major changes to the field — and to Israeli society more broadly — over the past 40 years, since Shatil’s establishment.

The exhibition and its accompanying catalogue give us a close-up of those characters, their fascinating life stories, and the change they made in Israeli society.

During the event, which was attended by Israel’s President Isaac Herzog and his wife Michal Herzog, Shatil Director Esther Sivan reflected on Shatil’s contribution to building Israel’s social change field. An excerpt of Esther’s speech is below:

The year is 1982. Just a handful of advocacy and protest organisations are active in Israel — no local community organising efforts, no organizations in the Arab community, no shared living initiatives, and no human rights or democracy organisations. Three years after its founding, the New Israel Fund has a game-changing insight: Grants and traditional philanthropy aren’t enough to strengthen civil society. Organisations and community grassroots groups need guidance and assistance if they are to fulfil their missions.

NIF asked itself: How do you start an NGO, and what has to happen in order for it to flourish? How do you organise as a community against injustices taking place in your neighbourhood, your city, or in Israel? How do you translate needs on the ground into policy change? And then came Shatil. With meticulousness and passion, with advance planning but also spontaneity, Shatil began nurturing strategies for social change.

The first decade of Shatil’s life was devoted to sowing seeds and nurturing early strengths, based on guidance and assistance to grassroots organisations from the Galilee to the Negev, opening a Haifa branch in addition to Jerusalem headquarters. Shatil reinforced civil society’s role in criticising the government — through a decade of ideological, conceptual, and attitudinal development. Shatil’s second decade invested in connecting the wave of Soviet and Ethiopian immigrants to Israeli society, and opened the Shatil Beer Sheva branch — initiating long-term guidance for the local Bedouin population and all Negev residents toward recognition, justice, and the righting of wrongs. The Shatil Center for Policy Change was officially established during Shatil’s third decade, and became a hub for those seeking to influence government policy design.

From Shatil’s fourth decade and up to the present day, “impact“ has been the key concept. Ushered in by the 2011 social protests, this has been a decade of activism, of community effort, of technology, social media and digital tools, and of globalisation. Today Shatil’s focus is on guiding organisations toward meaningful change on the ground: to formulate strategy and manage partnerships, conduct proper project administration, and measure and evaluate social return on investment. It’s no longer a matter of tools for survival, but tools for actions that promote sustainability and long-term impact.

Just as we want to strengthen democratic institutions in the state, courts, government, parliament, free media, we need and must fight for an independent, free civil society that challenges the government and produces change… Shatil’s strength is knowing how to respond to the changing needs of civil society: to organise together, create circles of influence, develop partnerships, to build power, act in protest against public injustices — but also to promote, shape and change policies, and to offer alternatives.

We at Shatil are construction workers building the practice of social change… laying the foundations, the cement and the bricks. But we have not done it alone, but together with you — the 40 generators of change. You are the architects and the dreamers who have shaped a new reality in each and every community. The stories of your life and the stories of the establishment and development of the organisation or initiative you have built are 40 stories of social change… You are the light that leads the camp, I hope we have helped you light the lantern.

Sivan concluded with the words of Palestinian poet Mahmoud Darwish (1942-2008):

As you prepare your breakfast, think of others

(do not forget the pigeon’s food).

As you wage your wars, think of others

(do not forget those who seek peace).

As you pay your water bill, think of others

(those who are nursed by clouds).

As you return home, to your home, think of others

(do not forget the people of the camps).

As you sleep and count the stars, think of others

(those who have nowhere to sleep).

As you express yourself in metaphor, think of others

(those who have lost the right to speak).

As you think of others far away, think of yourself