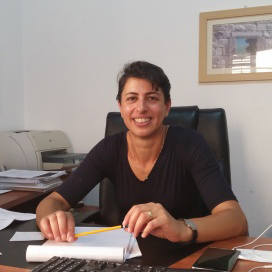 Rawnak Natour, Co-Executive director of Sikkuy, was honored with the first-annual Sami Michael prize for “individuals whose work promotes an egalitarian and just society in Israel.” She accepted the honor at the Haifa municipality in June along with two other social activists, Shula Mola and Yoav Laloum.

Natour is a Palestinian citizen of Israel who grew up in Qalansawe, 16 km from Netanya. Upon accepting her award, she described her childhood in Qalansawe and the lasting impact it had on her, “I remember as a little girl noticing the striking social gaps: the dirty streets of my home village, the lack of infrastructure and basic social services, especially in comparison to Netanya which I visited every 2-3 months, mainly for doctor’s appointments. Netanya was a clean and modern city, where residents had all the necessary services and infrastructure. As a little girl I couldn’t understand the reason for these gaps, and was furious.”

Although Natour was initially angry at her village for lacking the proper bus line to get her to Netanya for her doctor’s appointments, she had a realisation early on in life she said made her very “fortunate.” Natour realised from a young age that it was not her society’s fault that the gaps existed. From a place of strong community grounding, she committed to finding the structural reasons for the hardships of Palestinian citizens if Israel.

Alongside a Jewish Israeli colleague, Natour now co-directs Sikkuy – The Association for the Advancement of Civic Equality. She called her Co-Executive Director Ron Gurlitz, “a remarkably insightful professional and a true optimist.”

Sikkuy works for a shared society in Israel for Arabs and Jews alike. The organisation’s flagship program, the “Equality Policy Department,” addresses the type of economic gaps that Natour experienced as a young child. They map inequalities in distribution between Arabs and Jews as well as make policy recommendations and conduct advocacy in order to bridge these gaps. Sikkuy promotes shared and equal society through a number of projects. They encourage the Arabic language in the public space, offer education initiatives, and demand fair representation of Arabs in the Jewish Israeli media.

Natour has over 20 years of experience in social activism and human and civil rights. She plans to continue to do this work and described the many ways it has become personal to her life. She gave a warm thanks to her supportive partner Kim and three children: Adam, Malik and Noah. Natour noted that they too have had the “courage to pay the price for being part of this arduous struggle.”