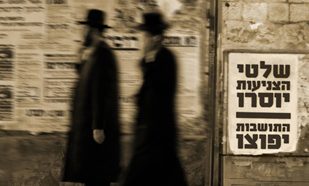 The court ruled that the municipal government was guilty of gross negligence in their failure to act against the illegal signs, awarded damages of NIS15,000 to each of the four women, and insisted that the city immediately remove the signs.

In his decision, Judge David Gidoni said: “These signs were intended to put constraints on women – and women alone – in the public sphere. They cause great harm to the basic right of women to equality and respect. Their presence is liable to create the impression that an area of the city belongs only to one specific population and that their social norms must be followed by everyone who lives there or passes through. That impression would be strengthened by signs that appear to be official.”

Ignoring the calls of the female plaintiffs “will imply that the sign represents the city’s opinion,” Gidoni said. “It will assist in the creation of a social atmosphere of obedience to the signs and encourage enforcement by the city’s residents, possibly even enforcement through violence.”

IRAC lawyer Orly Erez-Likhovski said the municipality declined to remove the signs out of fear of violence and even riots. “Our argument in court on Sunday was that the signs contribute to the atmosphere of violence against women,” she said.

“We may have to go back to court to enforce their removal, but this is very important first step. It is the first legal case on modesty signs since the attorney general ruled they were illegal.”

The Israel Religious Action Center is the advocacy arm of the Reform Movement in Israel, a long-time NIF grantee, and Israel’s preeminent civil and human rights organization addressing issues of religion and state.