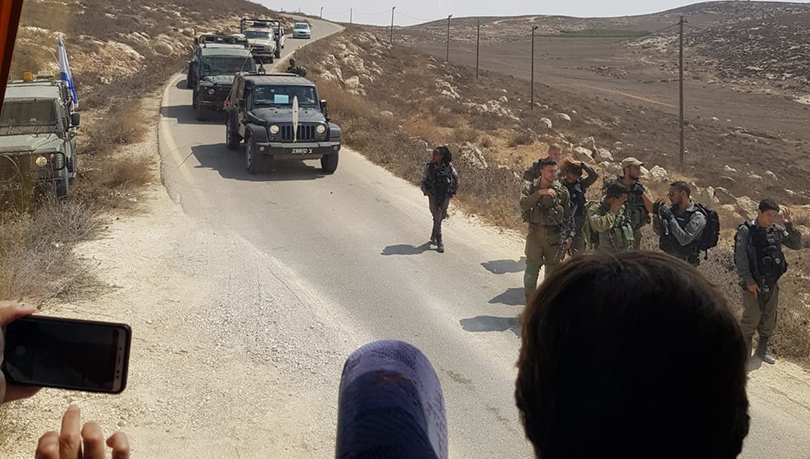 Breaking the Silence led a large study tour of 120 people to the West Bank a week after these activists were violently attacked by settlers. They intended to also visit the site of that violence. In the course of the tour, Breaking the Silence CEO Avner Gvaryahu, Spokesperson Achiya Schatz, and Attorney Michael Sfard were detained by the Border Police and accused of entering a closed military area.

Gvaryahu vowed that this harassment will not stop them. “We are not going to give up in the face of settlers’ violence and we’ll go back to touring in the southern Hebron Hills very soon,” Gvaryahu said.

Settlers in the area frequently attack Palestinian shepherds and farmers. Ta’ayush documents these attacks, many of them by the residents of Mitzpe Yair. To date nobody has been arrested. Mitzpe Yair was established in violation of Israeli law in 1998 and even though it remains unauthorised, the government has made no attempts to dismantle the settlement.

Gvaryahu, Schatz, and Sfard were detained for allegedly ‘violating a military order,’ taken to a nearby police station, and released without charges three hours later. The Border Police had given the 120 participants on the tour just one minute to get back on their buses. They detained the three when not everybody was able to board the buses in time.

Gvaryahu said that the study tour was part of the routine activities of Breaking the Silence in which IDF veterans monitor what takes place in the West Bank. “The events at Mitzpe Yair did not occur in a vacuum. In recent months that has been a rise in the level of violence directed at us and other activists in the region. The verbal and physical violence by settlers towards our guides has meant many of our tours in Hebron and the Hebron Hills have been blocked by the security forces.”

Knesset Member Mossi Raz (Meretz), who also took part in the Breaking the Silence tour, accused the army of “taking orders from the settlers, land criminals who squatted at the site illegally.” He added that “The IDF cannot act according to the wishes of the settlers.”

Last month, one of the Breaking the Silence founders, Yehuda Shaul, was struck by a settler and his face was bloodied. Even though the attack took place in front of the police, only one of the assailants was stopped. He was then released without charges after brief questioning.

In response to the detention of the Breaking the Silence leaders, NIF CEO Daniel Sokatch said that the government “has threatened, lied about, and blamed those of us who support democracy and equality for all people and an end to the occupation. It is now clear that this government intends to abandon its basic responsibility to protect its citizens from violent crime, and that dissenters from its cruel policies will face legal persecution.

“This goes beyond political disagreements. This is a government endangering the physical safety of citizens who stand up for human rights. We will not be intimidated or silenced.”