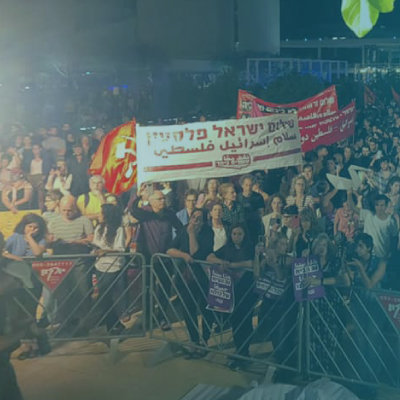 Over the past two weeks, NIF grantee, Omdim Beyachad (Standing Together), brought thousands of Jews and Arabs to the streets across Israel to stand in solidarity against escalation and violence. Before the announcement of the ceasefire on May 21st, Standing Together organized Jewish-Arab anti-war demonstrations in dozens of cities across Israel to fight for a shared future and an end to the occupation.

In recent weeks, extremists from Lehava, a right-wing Jewish supremacist group, have led riots and racist violence in the streets of Jerusalem, targeting and harassing Arab residents. In response, Standing Together launched a petition to have Lehava classified as a hate group. On Friday, May 21, Standing Together and Combatants for Peace planned a Freedom March in Jerusalem. On May 22, they held a demonstration in Tel Aviv which drew thousands of Arabs and Jews who came together in Rabin Square and demanded a ceasefire, an end to settlements and the occupation, and progress toward Israeli-Palestinian peace.

Omdim Beyachad (Standing Together) is a grassroots people’s movement in Israel organizing Jews and Arabs, locally and nationally, around campaigns for peace, equality, and social justice, in order to build power and transform Israeli society.