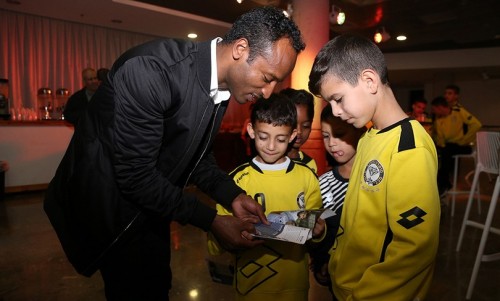 It was a cold night in December at Netanya’s soccer stadium as a team of Israeli players gathered for something a bit unusual.

The launch of the 2018-19 season of the Team for Social Responsibility was an opportunity for 13 players from Israel’s top leagues—men and women, Jews and Arabs—to meet off the field, and to launch their activities for the year ahead.

The Team for Social Responsibility is a project to get well-known soccer players to work together to eradicate racism and violence, and to promote dialogue, equality, and coexistence in soccer—a model which is now being replicated in other countries. It is one of the flagship projects of Kick It Out Israel, a project of the New Israel Fund, the Israel Football Association, and the Israel Football Players’ Association, and with the support of UEFA’s Football Against Racism in Europe (FARE) Network.

At the launch event, former Maccabi Netanya star and current Netanya council-member Imaye Taga, told those gathered: “I am very excited to be part of this team again. Last year we launched the team and this year more players have joined—it shows how much sports personalities have a huge influence on the population, and what an impact we can have on the sport.”

Maor Buzaglo, who plays for Beitar Jerusalem, stressed the importance of being a role model to the younger generation, noting that the youth look up to soccer players. He says that celebrity athletes have a unique opportunity to use their standing in a positive way by putting a spotlight on initiatives such as the Team for Social Responsibility.

“Soccer players need to learn to be more cordial to each other, on and off the field,” said Maharan Radim, an Arab player for Bnei Sakhnin. who also used to play for Hapoel Beer Sheva and Maccabi Tel Aviv. “We need to speak to each other politely and ensure that racism has no place in soccer.”

Oshrat Eini, who plays for ASA Tel Aviv women’s team, emphasised that “sports — and soccer in particular — have the ability to break down barriers between people. On the field, we may be trying to win by beating our opponents, but society will be the real winner if soccer players use the sport to fight racism and promote tolerance.”