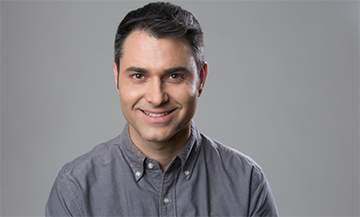 Over the course of this past year, since he took the reins of NIF’s team in Israel, Mickey Gitzin has become a household name in Israel. He is sought after by the top media outlets. He has found himself to be the target of Prime Minister Benjamin Netanyahu’s frequent mud-slinging. He has become a leader not only of the New Israel Fund but also of the progressive camp that seeks democracy and equality for all Israelis.

Earlier this month, Netanyahu called out Mickey on Facebook over Mickey’s call for Jewish-Israelis to join an Arab-led demonstration against the Nation-State Law. The prime minister’s attack caused outrage amongst leading public figures, journalists, and supporters.

Former Prime Minister Ehud Barak took on this smear during an interview with Galei Tzahal. “The prime minister goes after an IDF Reserve Officer,” he said. “A man named Mickey Gitzin. The prime minister targets him and explicitly incites against him when this person’s only sin is that he leads a fund that contributes millions every year to Israeli society, including to the work of the ministries of his government. This is absurd.”

Catching Mickey even in the halls of the NIF-Israel offices is not easy. He doesn’t sit for very long. He frequently checks his phone. He’s heard one minute on one news radio program and the next minute on another. In each interview he helps uncover just what the New Israel Fund is, revealing to the public what Israel’s leaders fight hard to hide.

“The New Israel Fund is under attack because it is successful,” Mickey said. NIF has become “a symbol for a liberal and open Israel that has taken upon itself to lead to fight for the values of the founders of this country,” he added. “No one else will do it instead of us.”

The path that Mickey took to become the leader of the New Israel Fund was unusual. Mickey was born in Azor, a small urban township that makes up part of the Tel Aviv metropolitan area. He grew up among Sephardic and religious Jews in Beersheva, the son of Russian-speaking immigrants with right-wing views. His first rebellion against his parents was keeping kosher. The second was denouncing their nationalist views. But he took from them a social awareness of those around him and a caring for others.

“My parents fought their daily fight to become part of society and to bring us up,” Mickey said. “So I wanted to improve the world from a very early age.”

These values took Mickey into politics, where he continues to be involved as a member of the Tel Aviv-Jaffa City Council. He works primarily on issues of diversity – issues affecting the Arab community in Jaffa, and the LGBTQ community. Mickey is openly gay and lives with his partner, Moti, in Tel Aviv — this identity is part of his political life. Previously, he worked as a spokesperson for Knesset Member Ilan Gilon (Meretz).

Mickey’s real passion is for public service. He worked for three years with Festival B’Shekel, the One Shekel Festival, organized in Israel by Shaanan Streett of the band Hadag Nahash. The initiative made world-class musical performances available outside of Israel’s center and affordable for everyone. He has a Master’s Degree in Public Policy from University College-London and has served as a shaliach in South Bend, Indiana.

His work as a shaliach inspired him to found Israel Hofsheet, Be Free Israel, an organization that works for the separation between religion and state. One of their main successes while he was a director was popularizing a real alternative to marriage under the Rabbinate. As a shaliach in the States, he was influenced by the Jews he met abroad who wanted to live religiously and also act on progressive values. The connections he made and the learning he did as a shaliach in Indiana also drove him to leadership of the New Israel Fund, inspired by the values-based partnership between Israelis and Jews all over the world.

Asked what is his greatest challenge these days as NIF executive director in Israel, Mickey says it’s trying to reveal the truth.

“The notion of truth and fair debate is completely not present in the political situation in Israel today,” Mickey said. “We still work with facts and the other side has lost a commitment to those values.”

“Israelis have come to see what NIF stands for,” Mickey said. Israeli support for NIF has grown tremendously this year especially in light of Netanyahu’s slander of the organization. Israeli donations to NIF have increased exponentially, with many supporters dedicating their contributions to Netanyahu.

“As what we do becomes more clear (to the Israeli public) and as we fight the good fight, people are interested in being part of our community and they join us,’’ Mickey explained.