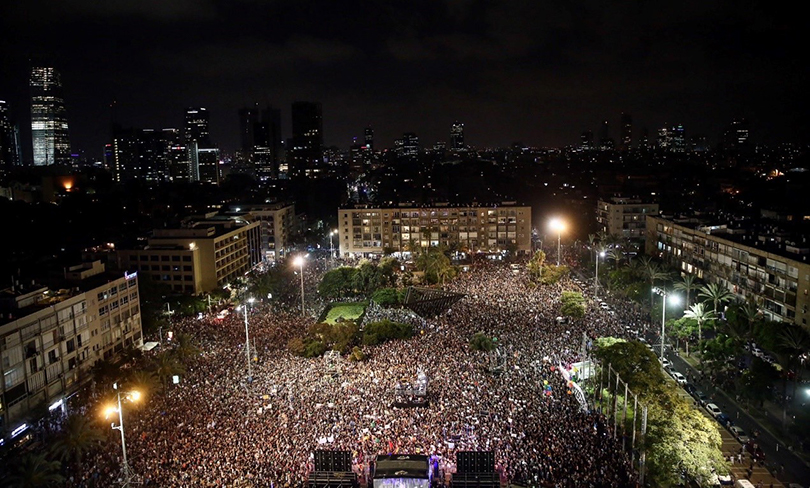 In an unprecedented show of solidarity for Israel’s LGBTQ community, nearly 100,000 people gathered in Tel Aviv’s Rabin Square on Sunday night to protest the exclusion of same-sex male couples and single men from the Surrogacy Law amendment, which the Knesset passed last week.

Sunday saw incredible scenes throughout Israel as the Histadrut, Israel’s main trade union, backed a general strike in solidarity with the LGBTQ community. Protestors marched along Tel Aviv’s Ayalon Highway, demonstrated outside the Prime Minister’s residence in Jerusalem, and protested in many of Israel’s largest cities. Dozens of major employers also gave permission for their employees to strike. NIF encouraged and supported involvement in the strike.

Chen Arieli, head of veteran NIF grantee Aguda – Israel LGBT Task Force, told those gathered in Rabin Square, “This is nothing short of a battle for the ‎character of Israeli society. Yes to ‎equality and no to discrimination. Netanyahu, look out at this square! This is the ‎biggest protest in the [LGBTQ] community’s history ‎and now it’s our turn to say, enough! We demand ‎action – in legislation, in budgets, in policy, and ‎in long-term plans that have to be formulated with ‎us, not above our heads. We are equal citizens in ‎this country!”
‎
She added, “Tonight, our community offers nothing less than an ‎alternative to the Israeli reality. We offer a plan that ‎takes into account the differences between people and ‎their complexities and collects them into one united ‎call that proves that together we are strong. ‎Together, we will create the Israeli society in ‎which we want to live.”

Israel’s LGBTQ leaders have refused Netanyahu’s offer of a meeting until he puts forward concrete proposals on the surrogacy issue. LGBTQ leaders suspect that his proposed meeting would just be a photo-op for Netanyahu to show the world how liberal he is, without changing his policies. Netanyahu allowed the Surrogacy Law amendment to exclude gay men in order to satisfy his Orthodox and ultra-Orthodox coalition partners and to maintain their support for the Nation-State Law, which passed shortly after.

NIF is focused now on supporting the most marginalized members of the LGBTQ community. Today, NIF is supporting a unique Pride event in Lod bringing together Jews, Arabs and other residents of Lod. NIF also gave an emergency grant to Ma’avarim – Israel Trans Community to combat violence, and discrimination against Israel’s transgender community. This comes after the recent stabbing of a 23 year-old transgender person in Tel Aviv last week.

In a post on NIF’s Hebrew Facebook page, NIF’s Uri Zer Aviv wrote, “This attack is one of many against the transgender community, which is exposed on a daily basis to humiliation and ignorance from Israel’s establishment and society. This is expressed in discrimination by organisations, which pushes many in the community to prostitution, job insecurity, poverty, and homelessness. Putting these important issues on the agenda has the power to raise public awareness.”