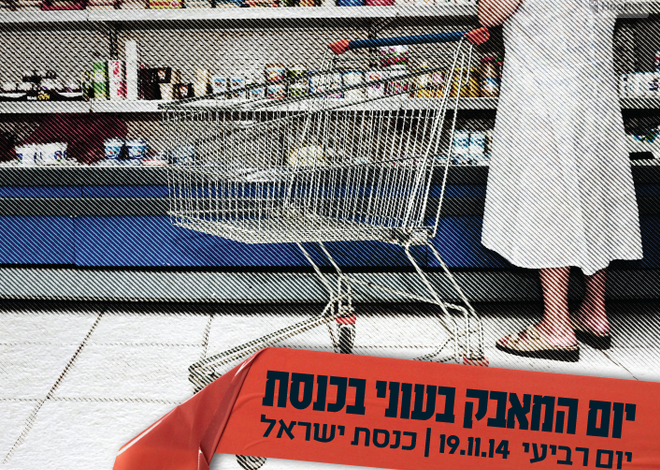 “Should I buy my daughter rain boots for the winter or pay my rent?”

This is the heart-rending question asked by 27-year-old Racheli, a single mother and supermarket teller Racheli earns NIS 4,000 (about $1000) a month but has basic expenses of NIS 6,000.

Her article, part of a series published by YNet in advance of International Day for the Eradication of Poverty, has garnered hundreds of comments. Both the series of articles and the annual Knesset day, marked on November 19th, are the initiatives of NIF’s action-arm SHATIL and the Rabbis for Human Rights-led Forum against Poverty, a group of 15 civil society organizations.

“The government’s current policy makes it hard for even working people to support ourselves and our families,” Racheli writes. “Government policy that will allow me and many others to escape the cycle of poverty includes raising the minimum wage and the amount of money that can be earned without harming government benefits needed for the basics, lowering the value added tax, and childcare for children during holidays so parents can go to their jobs.”

While all eyes are turned to the violence on the streets of Jerusalem and elsewhere in the country, the 1,755,000 (20 % of the population) Israelis who live below the poverty line are, like Racheli, still having trouble filling their shopping carts. The Forum Against Poverty is working on a number of fronts to persuade the government to implement the recommendations of its own Alaluf Committee to Fight Poverty in Israel. The Forum’s multi-year efforts were instrumental in the formation of the Committee.

Yesterday, a standing-room-only crowd, including many MKs and people living in poverty, demanded concrete government action to reduce poverty at the Knesset Conference on Poverty Wednesday.

Tzafra Dweck, chair of the Israeli Association of Social Workers and a member of the government-appointed Alalouf Committee to Fight Poverty in Israel, warned that Committee members were prepared to take to the streets if the government did not budget for the Committee’s recommendations, which were the minimum needed to combat poverty. And Shas leader Aryeh Deri said that his party was already introducing the Alalouf Committee recommendations as Knesset bills so they would have the power of law.

“Israel has no serious, comprehensive anti-poverty policy,” said SHATIL policy change expert Giyora Wahle. “It’s time to act seriously to eradicate this scourge. The government has the means to do so. It just needs the will.”

Forum members have worked tirelessly in the past months, meeting with Knesset members and other government officials, analysing the state budget, creating email and social media campaigns, organising demonstrations to press for government action, and planning for the day in the Knesset.