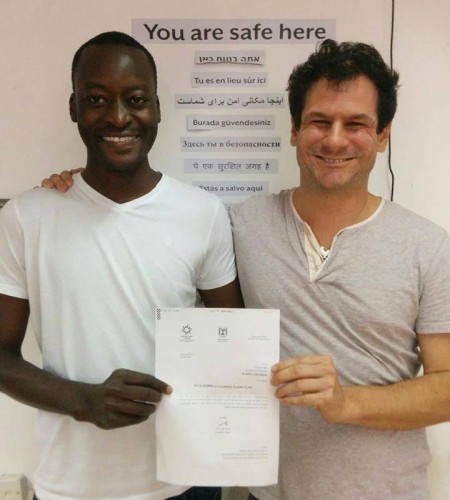 Last week, while we in the UK were grappling with fundamental issues of identity and openness to the world, the State of Israel made a historic decision which reflected very similar concerns. After a four year legal battle and seven years of tenacious, dignified and inspiring leadership in his community’s campaign for justice, asylum seeker Mutasim Ali was granted refugee status by Israel’s ministry of interior. Mutasim is the first Darfuri to receive recognition as a refugee in Israel, in a case which human rights organisations are hopeful will serve as a precedent and open the door for many more of the 45,000 asylum seekers who are living in Israel in a state of limbo.

This case is a victory for Mutasim, his community, and the NIF grantees who have worked tirelessly to secure rights, recognition and basic human compassion for refugees in Israel- many of whom have fled genocide, persecution and war in their home countries and survived torture en route to Israel.  The victory is sweeter still for its timing: the middle of “refugee week” around the world, when refugees everywhere look for solidarity, compassion and hope for a better future.

Mutasim’s case was won by Assaf Weitzen, the head of the legal team of NIF grantee the Hotline for Refugees and Migrants. And Mutasim himself is the Executive Director of the African Refugee Development Centre (ARDC), an NIF grantee which is run by asylum seekers for asylum seekers.  ARDC has been instrumental in empowering, training, and motivating the community to speak out on its own behalf. In fact, just last week our own UK activism fellows launched a fundraising campaign for a very special ARDC project which is training new leaders and equipping them with the skills and knowledge to advance their community’s cause.

Mutasim is an incredible man. I worked with him for many years in my role at Shatil, NIF’s initiative for social change, on projects to empower and organise asylum seekers in Tel Aviv. Mutasim’s dignity, optimism and passion for justice are infectious. Only 29 years old now, Mutasim fled to Israel in 2009 after being detained without trial, held in isolation and tortured in Sudan on account of his activism in non violent protests. In Israel, he has channelled his activism skills and undeniable charm to advance the rights of refugees in Israel and build bridges to Israeli society. Through countless media appearances and with fluent Hebrew, Mutasim became a symbol of his community’s struggle and a dignified spokesperson for their cause.

He said last week:  “I thank the State of Israel for allowing me to be here for all these years and for accepting my asylum application. I promise that Israel won’t regret it. I’ll continue to contribute my bit to Israeli society and the asylum seekers’ community in Israel.”

For us at the New Israel Fund – as NIF’s global leadership gathered in London for our international board meeting and made important decisions about how best to invest for impact towards a more just and tolerant Israel, this great victory reminds us that with dedication and partnership, change is possible.