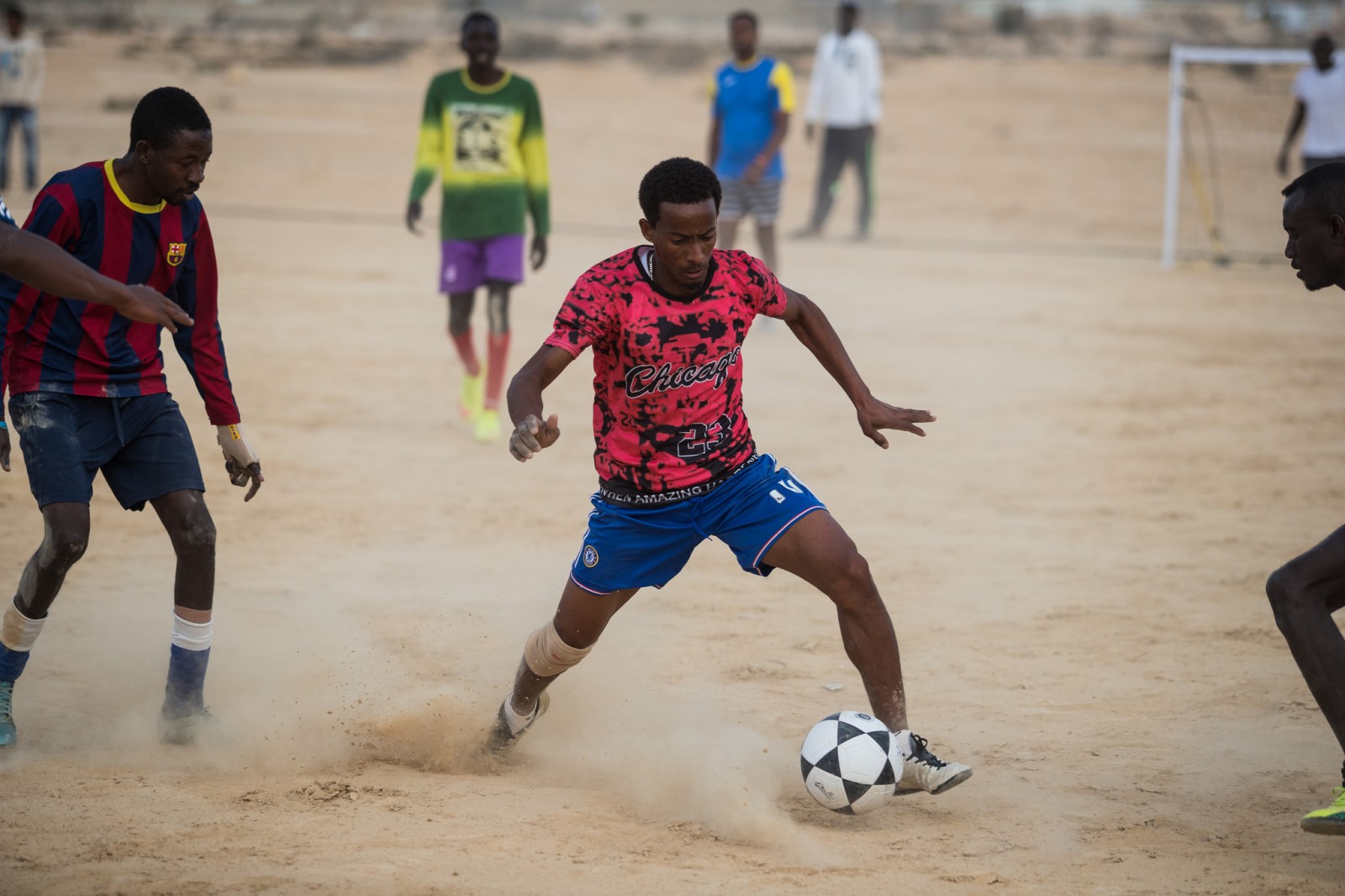 Israeli football teams from across the country joined the New Israel Fund on Tuesday to mark International Day for the Elimination of Racism with a solidarity visit to Israel’s Holot detention facility in the Negev Desert where about 4,000 African asylum seekers are being held.

The event, which included famous Israeli players and entire youth teams, was an unprecedented demonstration of recognition of the migrants who live in limbo at a facility established to dissuade refugees from staying in the country.

The cooperation between the football teams who participate in the New Israel Fund’s Kick Racism Out of Football programme was a significant, collective statement against racism and a demonstration of solidarity on this day.

The main focus of the event was a mixed game with the Bnei Yehuda team together with the asylum seekers’ team that was founded at Holot.

Bnei Yehuda’s participation was of particular symbolic importance since its home field is in the Hatikva neighborhood of south Tel Aviv, the same area that was a flashpoint of violent demonstrations against the African asylum-seekers living there. The Holot event was the first opportunity for the sides to come together with the goal of meeting the “other” and of stamping out racism.

“We say no to racism,” Shaul Bibi, an Israeli journalist and fan of the Bnei Yehuda team, told the hundreds of detainees who came out for the event. “For me it’s important just to show up here, two or three hours south of Tel Aviv to say we know about you.”

In addition to Bnei Yehuda, the Israeli teams represented a variety of teams from across the country, including the Arab group Bnei Sakhnin, Hapoel Tel Aviv, Maccabi Beer Sheva, and Maccabi Netanya.

“Our club makes it our motto to accept those who are different from ourselves, to help others, and to express solidarity for all peoples whoever they are,” said Erez Neeman, a leader of the Hapoel Tel Aviv team. “It’s already been proven more than once that football is an ideal source for reconciliation and the closing of gaps.”

Players from the Israeli youth teams presented 60 shirts, 20 footballs and goals to the migrant players as part of NIF’s Kick Racism Out of Football programme.

“This is a good day, when people come to play football with us,” said Bereket Gebrekirstas, 29, who walked through Eritrea, Sudan, and Egypt to get to Israel five years ago. He worked as a dishwasher in Tel Aviv before he could no longer renew his tourist visa and was told to report to Holot where he has lived for five months. Like many of those at the facility, he was told that after a year he would be able to renew his visa.

Holot is an “open facility” and the detainees are technically allowed to leave each morning as long as they return by a certain time each night. However, it is located in the middle of the sparse Negev desert with few transit options and very little for the migrants to do in the area.

Imiya Taga, a well-known Ethiopian-Israeli football player with Maccabi Netanya who traveled to Holot for the event, said he felt a special comradery with the detainees.

“We both came from Africa. We used to be neighbors,” said Taga who immigrated to Israel with his family at the age of five in Operation Moses in 1991. “It was important for me to come here to see them smiling a bit. If only I had a solution for them but I’m not in the Knesset or the government.”

The NIF Kick It Out programme brings together players, teams, educational programmes, and the media to inspire thousands of fans to display greater respect and to work toward a reduction in violence and racist behaviour. The programme is based on the belief that football is a uniquely powerful tool for combating racism and promoting shared society in Israel.