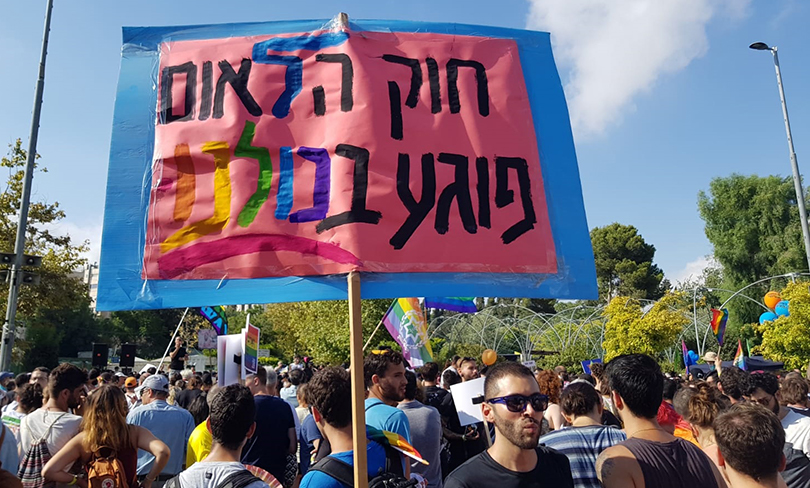 More than 20,000 people marched through Jerusalem last week in the city’s annual Pride March. This was the 17th year in which the event took place, having been initiated and established as an annual event after a protracted struggle by NIF and a range of human rights and LGBTQ community campaigners including NIF grantee Jerusalem Open House, which organizes the event.

This year, the Jerusalem Pride March was not only an act of solidarity with Israel’s LGBTQ community and in particular the recent government decision to deny gay men surrogacy parental rights. It was also a protest rally against the recently enacted Nation-State Law.

As Mickey Gitzin, NIF’s Director in Israel, said in a video clip posted on NIF Israel’s Facebook page. “The humiliating response by the Prime Minister to the Surrogacy Law not only drove the LGBTQ community into the streets but also the masses who are fed up with discrimination, incitement, and the disregard for entire communities in this country.”

“The humiliating response by the Prime Minister to the demands of the LGBTQ community was the straw that broke the camel’s back and came after a series of divisive events that have happened here under the auspices of the government.”

“It is convenient for you to divide and rule: to discriminate against the Arabs in the Nation-State Law and then try to compensate the Druze with budgets. To enact the Surrogacy Law with a version for the ultra-Orthodox and then set up a committee for the LGBTQ community.”

“We are here to say that if everyone is not equal then no one is equal. Discrimination and racism are a contagious disease that ignores how equality for LGBTQ people also means equality for Arabs.”