Jews and Arabs are Standing Together 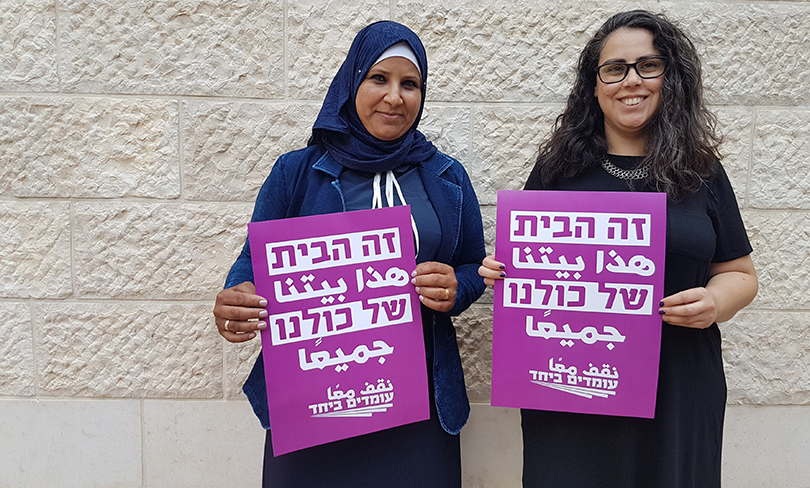 While some campaigns are openly inciting against Arab citizens and opposing any form of Jewish-Arab partnership, Omdim Beyachad (Standing Together), is conducting a public campaign to spread the message that Jewish-Arab political partnership is legitimate and is necessary to end both the occupation and the incitement of right-wing politicians. They published a powerful video in which four Arab Israeli women explain why they are needed in order to form a coalition that can lead the government. “You can’t do it without us. You’ve already tried,” they say in the video.

Omdim Beyachad is handing out flyers and hanging banners across Israel, staging protests outside the headquarters of right-wing parties, and campaigning online to spread their message. They are also running a get-out-the-vote campaign to encourage Arabs to vote on Election Day and have their voices heard. The New Israel Fund is supporting Omdim Beyachad’s campaign with an emergency grant.

In one post on Facebook, Omdim Beyachad wrote, “Netanyahu and his friends have been engaged in incitement against Arab citizens: they are trying to separate us, and to question the legitimacy of Arab citizens. They want us to think that Arab-Jewish partnership is dangerous. Because when they have no solutions for the problems we’re facing — for housing, education, health, transportation, security – they resort to inciting against Arabs and attempting to delegitimize them.

“[But] they know that only together, Jews and Arabs, will we be able to replace the racist government and establish a government which cares for the welfare of its citizens, which creates solutions, and which makes peace and not only war.”