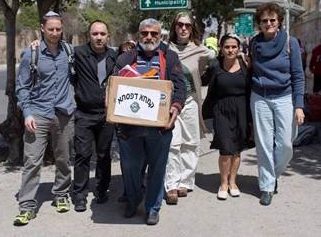 Nearly one third of Israelis live in poverty. Thirty-Five percent of Israeli children are poor – and that number increases to over 40% in the ultra-Orthodox and Palestinian Israeli communities. Among OECD countries, Israel has one of the highest rates of poverty.

We’re working to change that.

The Forum Against Poverty, a coalition of 8 organizations jointly led by NIF’s action-arm Shatil and NIF grantee Rabbis for Human Rights, is demanding change.

In a letter sent to the head of each party involved in the coalition negotiations, the Forum demanded that the new government implement a comprehensive program to reduce poverty.

Just before Passover, a delegation of the Forum delivered a holiday gift basket to Prime Minister Netanyahu with items symbolizing the basic components of a life with dignity: a roof over one’s head (doll house), public transportation (toy bus), health rights (first aid kit), affordable groceries (shopping bag), water (water bottle), and electricity (work tools). Each delegation member then spoke about the item/issue that most affected him or her. The visit was covered by major media outlets.

It is a Passover tradition to give parcels of food to the poor. Before every holiday season, Israelis are flooded with calls from well-meaning charities that want to ensure the poor have food on the table for the holiday.

The gift basket was meant to remind the PM and other policy makers that these parcels are not enough and that systemic, multi-dimensional change is needed to reduce Israel’s endemic poverty.

“The government and its leader are responsible for making sure that Israeli citizens can live in dignity – dignity that depends on justice and policy decisions and not on charity,” said Shatil’s policy change expert Danny Gigi, who was a member of the delegation.