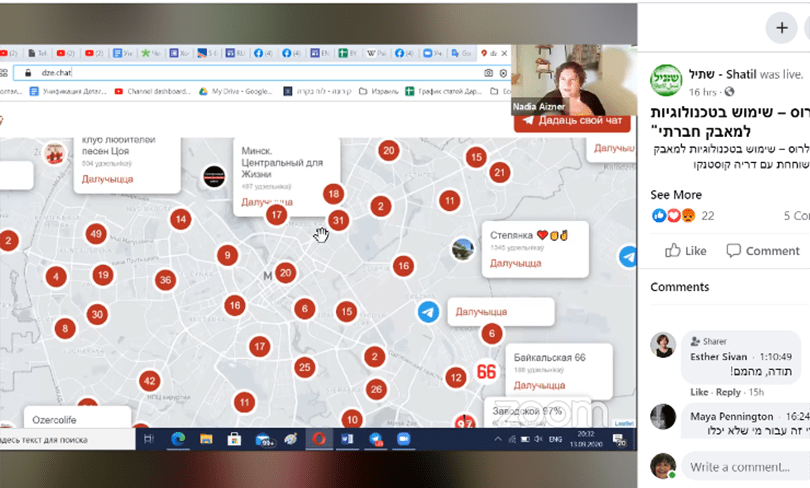 In a country in which a dictator shuts down the internet and jails opposition candidates on the eve of a national election, what is a people to do?

If you live in Belarus, the high-tech capital of Eastern Europe, you find a way.

These ways were elucidated to an Israeli and international audience this week in a Shatil webinar, entitled “The Belarus Protests: Using Technology in Social Protests,” with Belarussian activist, journalist and high-tech maven Darya Kostenko, who immigrated to Israel five years ago.

From her desk at home, Darya is as involved as one can be in the massive women-led daily Belarussian protests against the stealing of the recent election by Alexander Lukashenka, the country’s longtime dictator. She provides intensive support by setting up secret platforms and providing other technical aids. Darya is a veteran of the 2001, 2006, and 2010 protests in Belarus who spent two weeks in jail due her activism.

Two hundred people registered for the webinar another 4500 watched on Facebook as Darya excitedly explained the many creative ways Belarussians got around the internet shutdown, including decentralized, interactive maps of the protests and of the location and number of police, buildings that had opened their doors to people chased by police, and various mutual aid platforms. She described an ongoing attempt to create an alternative government, including alternative ministries of health, welfare, and education, which organizes children to learn at home in small groups with teachers fired for their activism.

Other mutual aid initiatives are proliferating rapidly: helping people who lost their jobs get compensation from foundations, collecting stories of torture from victims, free legal, medical and psychological help for torture victims, matching people who have means with those who need food, a digital passport with which people can buy products at a discount from stores that support the protest, and other ways to call out and expose police violence.

The protesters have also succeeded in recruiting workers. After stories of torture came out, a number of major factories went on strike.

Nadia Aizner, Shatil Russian language media expert who immigrated to Israel from Belarus 30 years ago and who organized the webinar, said “I feel this is one of the most fascinating things that have happened in world politics during the last year and maybe more. It is characterized in its essence by a deep connection to technology, and not just in the ways with which we are familiar.

“The protesters are hugely successful in the image war. Lukashenka is coming across as an old, crazy, pathetic Soviet while the protesters look amazing: peaceful, classy, elegant, with white dresses and flowers.”

Nadia admitted that she was surprised that the relaxed, law-abiding almost laconic Belarussians have poured into the streets in such full force. How did this happen?

Darya traced the roots of the protest to Lukashenka’s complete failure to address the coronavirus crisis. In fact, Lukashenka denies the existence of the virus, did nothing to stem its spread, and went so far as to publicly insult people who had died from it. He claims it is a minor flu that can be cured by a combination of vodka, sauna, and working on a tractor.

“Lukashenko is an old-fashioned Soviet,” said Dayra. “He didn’t understand that the people aren’t stupid.” The country’s well-paid, cosmopolitan high-tech elite, who feel European and had been living in a bubble, suddenly understood that the government didn’t care about the people. They woke up, and took over for the nonfunctioning state, buying hundreds of thousands of masks and other protective equipment, medicine, and even food for overworked medical staff.

The high-tech mavens set up user friendly digital platforms for people to upload photos of their ballots that were used by more than a million voters (out of a population of nine million.) These demonstrated that, despite Lukanshenka’s victory claims, Tsikhanouskaya had won more than 50 % of the vote. So the moment Lukashenko declared a landslide victory, people poured into the streets in protest, where they were met with unfettered police brutality. The tools and platforms used by citizens to fight coronavirus were now used to fight Lukashenka.

The moment someone becomes a protest leader he or she is arrested, so the protest has become leaderless, decentralized, and anonymous, said Darya. Everything is coordinated by a digital platform operated from outside the country called “Someone.” In response to a request from friends in Belarus, Darya set up a Facebook group to translate citizen journalism into English so people outside the country could get firsthand information. The result is www.voiceofbelarus.com, where one can see updates, photos, videos, and live feeds from the protests.

Nadia sums up the amazing changes taking place in the country of her birth: “I think Belarus is the first country in the world that is digital, just and egalitarian,” she says.

According to Shatil media expert Ilanit Edri Elul, “the Belarussian struggle is inspiring. Their situation is much, much worse than ours, yet they decided to go out and protest. They provide mutual assistance to one another in the absence of the state that takes responsibility and helps citizens deal with the corona virus. They find creative, hi-tech solutions to overcome every barrier the government erects.”

This was the first of a Shatil virtual series on protests around the world and what we can learn from them.