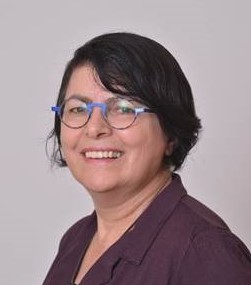 When Abeer Halabi was 12 years old, she convinced her parents to buy her a pants suit – something daring in her traditional Druze village of Daliat El Carmel – rather than the new dress bought yearly in honour of Eid El Adha. The next day dawned rainy and cold, and while on an errand for her mother, she came across a boy walking through a puddle who, unlike her, had no coat, boots or umbrella.
“I couldn’t celebrate the holiday after seeing that,” Abeer recalls more than 40 years later. “I couldn’t even wear the pants suit.”
Despite her smiling face and upbeat attitude, Abeer’s deep sadness and anger at injustice and inequality never left her. While a university student in social work, she joined an NGO of Daliat El Carmel high school and college graduates that was based on democracy and anti-tribalism and received NIF funding. Based on this activity, she was elected to the city council.
But Abeer found that the changes she could make as a social worker were limited.
With the exception of a big difference she made in the lives of youth as a probation officer in an Arab community in the north, “We were putting out fires,” she said. “We couldn’t change anything. I wanted to change things.” And even the difference in the youth’s lives were not systemic.
Abeer then studied group facilitation and conflict resolution, ran dozens of women’s and other dialogue groups, trained group leaders and directed a number of civil society projects. She earned a master’s in social work at Tel Aviv University with an emphasis on women and gender, lectured about life as a Palestinian citizen of Israel and about women caught between tradition and modernity in the U.S. and travelled to Germany, Turkey and Jordan in Israeli-Palestinian delegations and leadership groups.
After returning from two years in the U.S. where her cardiologist husband worked on a research project for the National Institutes of Health, Abeer decided she wanted to take on more of a leadership role in shared society work and in the discourse around shared society in Israel. Just then, a relative who had worked at Shatil told her of a job opening that she felt was tailor-made for her: Shatil Director of Shared Society initiatives.
“It was just what I was looking for,” says Abeer.
Abeer began working in Shatil two years ago, strengthening shared society grassroots initiatives; co-running Shatil’s Directors’ Forum for a Shared Society with Shatil Director, Esther Sivan; launching a Lowering the Walls anti-racism program in Haifa and building the capacity of shared society and Palestinian-Israeli organisations. Together with the NIF/Shatil leadership, Abeer is overseeing a strategic thinking and planning process regarding our shared society work. Her vision for the area includes Shatil organising the arena, connecting organisations and activists working on shared society in order to create a structure for shared society endeavours based on equality and shared leadership.
Abeer is optimistic about the possibility of a truly shared society in Israel.
“I believe there is hope for the development of a shared society in Israel that is based on mutual respect and solidarity,” she says. “I believe we can build a society in which each and every one of us has equal value; in which each and every one of us has the opportunity to influence and in which the differences between us are seen as an asset that enriches us and not as a barrier or limitation…
“I am honoured to be working to make a difference in our part of the world along with my amazing colleagues at Shatil and NIF,” says Abeer.