Meet Ameer Abu Hamad: A Tour Guide Introducing Others to the Stories of Jerusalem 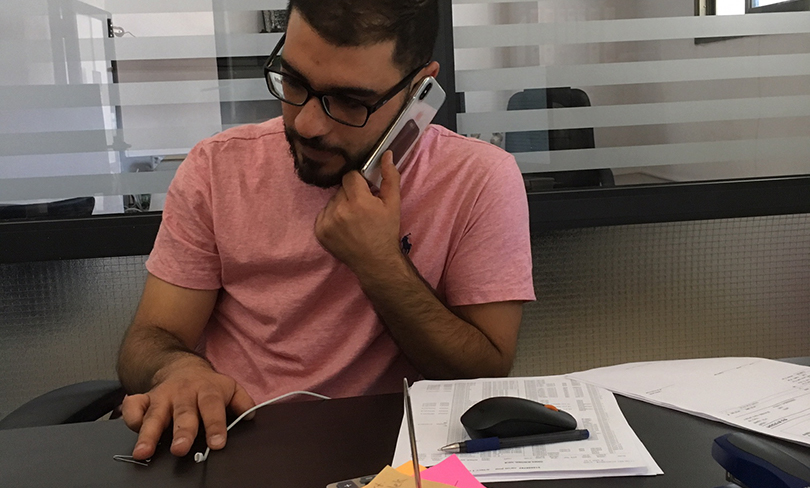 At 25, Ameer Abu Hamad has a college degree and co-owns a small business. He is charming, smart, and accomplished. He is also a living example of the little-understood complexity of being a Palestinian citizen of Israel. Born and raised in a pastoral northern Arab village called Uzeir, Ameer grew up under the shadow of the deaths of both his uncle in combat and of his young cousin by the hands of the police during the second Intifada.

So he stopped publicly telling the story.

The Abu Hamad family’s emphasis on education meant that their children attended private schools. For a project during his senior year of high school, Ameer developed a drug classification system for hospitals, which inspired him to study medical engineering at the Hebrew University.

His first year there was miserable.

“Muhammed Abu Khdeir was killed that year and there was a war with Gaza,” Ameer recalls,” I didn’t connect to anyone I met. On every visit home, I announced I was not going back.”

But a chance conversation with a group of Jewish and Palestinian students changed his life.

“We talked about our distress and what we were experiencing,” says Ameer, “I finally had a place in which I could discuss my ideas, be myself and feel accepted. An idea was born to bring Arab and Jewish students together.”

The group called its project Wahad al Ahad (One-on-One). About 250 students have participated in it every year since.

“During the memorial days, we lit two candles next to each pair of people and asked them to talk about their personal memories. It was the first time I saw an Israeli Jew and a Palestinian sitting opposite one another and talking about their memories during this time.”

In this setting, Ameer finally felt comfortable to open up and tell his own story.

“Wahad-al-Ahad returned my faith in Jerusalem to me,” says Ameer. He continues to voluntarily guide the program with a Jewish partner, Noam Sonennberg. Through the project, he discovered he preferred to work with people than in a lab.

Ameer woke up one morning last June to find that his car had been damaged in a Price Tag attack. These attacks are called this because they constitute a “price” exacted by extremist Jews to retaliate for perceived offences, such as when the government acts against illegal settlement outposts in the West Bank. His anger and hopelessness were mitigated when dozens of people showed up to support him through Tag Meir, a movement that counters Price Tag actions.

“I told them who I was and what happened in the place it occurred. It was an unforgettable experience. I knew I needed to show Jerusalem to people through its residents.”

That same year, with his coworker Noam, Ameer co-founded Nas Jerusalem, an organisation that runs educational tours of Jerusalem based on personal stories. In Shatil’s Lowering the Walls training and for three months beyond, Ameer and Noam developed the idea and conducted two pilot tours.

“These trainings among my best, most meaningful experiences in Jerusalem. I got tools from excellent professionals who were more like partners than facilitators,” says Ameer.

Ameer is excited to be launching his dream project. “The goal is simply to know Jerusalem through its people – all its people. It’s about what is happening in Jerusalem now. We need to know the present so we can build the future.”