Meet David Myers: Optimist and Historian at the Helm 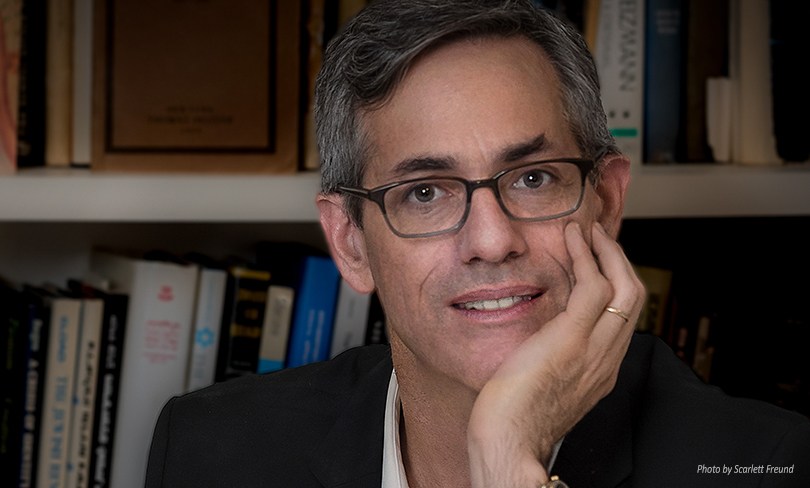 In the face of assaults on democratic institutions in Israel and in the US, it’s easy to be a pessimist. David N. Myers is anything but that. In October, NIF ushered him in as the new president of its board, succeeding renowned Israeli lawyer and activist Talia Sasson. A seasoned scholar who has taught Jewish history for 27 years at UCLA and served for ten years as director of the UCLA Center for Jewish Studies, David brings the sharpness of a historian’s mind and the determined optimism of an activist to the fight for justice and democracy in Israel.

Earlier this year, David left his position as president and CEO of the Center for Jewish History in New York to return to his position as the Sady and Ludwig Kahn Chair of Jewish History at UCLA—and to take up the mantle of leadership at the New Israel Fund. He approaches the volunteer job as if answering a calling.

“Given the world in which we dwell, and the urgency of the causes for which we are fighting, bacharti bachayim — I chose life,” David explains in drawing on a phrase from Deuteronomy.

The author and editor of some fifteen volumes in the field of Jewish history, Myers has a keen sense of what the stakes are at this time in our history.

“We find ourselves in a dark moment in history — a moment that seems at many levels to be hopeless, or at least full of despair.”

Nevertheless, David is undaunted. “My perspective as a historian reminds me that epochs give way to others, that regimes change, and that the pendulum of history swings from one pole to another.”

His optimism is rooted in history’s penchant for radical reversals, including in Israel’s own short history. The first phase of Israel’s history was defined by 30-years of Labor party rule. But then came the Mahapach, which saw the Likud come to power in 1977 and upended long-standing conventions and logic in the realm of Israeli politics.

It is not that David envisions that the right’s grip on power and politics in Israel will end tomorrow, but he knows that change is inevitable. “Recognising the dynamism and contingency of history allows me to understand change, to expect it, and in that sense, to hold onto hope that even this dark, antidemocratic, xenophobic period in history will give way to another period.”

And David is not waiting for the pendulum to swing back on its own accord. “If we are to effect meaningful change,” David says, “we cannot assume that we will shift history overnight. The struggle at hand is protracted, long term, and incremental. We’ve got to work from the bottom-up, people-to-people, community-to-community, building and stitching together a fabric of shared existence and shared society that makes a meaningful difference in people’s lives. That’s what New Israel Fund does.”

David also emphasizes the long-term value of what NIF can do in laying the groundwork for the “day after.” “I think a lot about the next day, the day after the darkness ends, when we need to build up again the institutions of democracy, civil society, and the idea of a shared society.”

In facing NIF’s mission to bring justice and equality to all Israelis, David sees the forces of history underpinning our current crises of democracy—and revealing the path forward. It is the same lens that he brings to his work at UCLA leading the Luskin Center for History and Policy, a center devoted to bringing historical perspective and analysis into policy formation.

He interprets the recession of democracy in Israel as not only a feature of forces intrinsic to Israeli politics—such as the longstanding rifts between Revisionists and Labor Zionism—but also as a function of global forces. What is happening in Israel and elsewhere is also a product of the effects of globalisation.”

David explains that “the world today is pushing back against the once irreversible logic of a world without borders. In fact, people are seeking to fortify their own national borders and exclude those who are not deemed to be native. They are fearful of the potential of globalisation to displace them in favor of cheaper labor elsewhere.”

That is why he believes that NIF’s long-term efforts to build economic security and resilient communities is so important to under-girding sustainable political change.

For David, paradigmatic political change is also about ideas.

“What we need to do is fortify and reinforce the democratic roots of Israel—to make clear that it can be a pluralistic and inclusive state,” he explains. “We have to create a robust discourse of democracy to stand alongside the call in Israel’s Declaration of Independence for freedom, justice, peace, and equality.”

The question before us is which Israel will emerge as history unfolds. Will it be an open, pluralistic, democratic, and free society envisioned by its founders? Or will Israel be a closed and illiberal nation state?

For a decade now, David argues, “we have seen the consolidation of one vision of Israel which is the idea of Israel as an ethnocentric Jewish state that regards as subordinate non-Jewish citizens of the state. The culmination of this ethnocentric nationalism is the Nation State Law of July 2018.”

“It is not a foregone conclusion that that idea will persist forever and continue to anchor Israel’s own sense of identity. But we must do what we can to change it, and to push for a more inclusive, vibrant, democratic, and pluralistic notion of Israel that returns the ‘democratic’ to the equation of ‘Jewish and democratic.’”