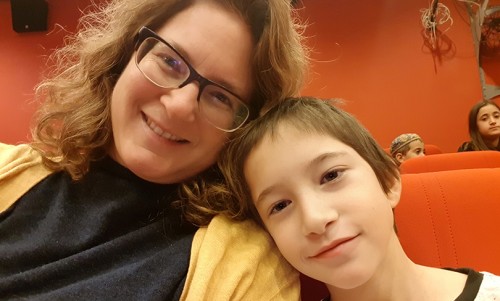 “This is home,” she told NIF News. “When we see it in the news, we see a region covered in smoke. But that is not necessarily the reality that we live in.”

Gali is happy to live in Sderot, located just a few kilometers from Gaza.

“Sderot has turned into a city that is really fun to live in. Every morning, I bike to the train and within an hour I’m in Be’er Sheva or Tel Aviv. There are many advantages – and one big disadvantage.”

She says that, paradoxically, more and more families are moving to the area. In Sderot alone, six new neighborhoods are currently being built.

Gali has been a kibbutznik all her life. She was born in Kibbutz Amir in the Upper Galilee and now lives in an urban kibbutz in Sderot. She arrived in Sderot as a soldier in 1991, met and married a member of the urban kibbutz, and they have made their home there ever since.

In addition to the feeling of belonging and mutual aid that comes from living in an intentional community, Gali says, “Many of us are social activists and we’re able to be so active here because we have a strong community to return to at the end of the day.”

Gali’s optimism extends to her activism. After the 2014 Gaza war, she joined the fledgling Movement for the Future of the Western Negev, which demands the government pursue a political settlement in order to bring peace and security to the area.

“The constant rounds of fighting have not brought peace. As residents of this area, we must demand no less than a political settlement. We must talk to Hamas, talk to the Arab countries. However it’s done, it must be done. There is no other way.”

Without a political settlement, Gali’s day to day life is often frightening.

“It’s scary,” says Gali. “You feel that any minute, [a rocket] could fall on your home and you have no control over it and you have to do your best to protect your kids.”

“We stick to our routine as much as possible because the worst thing in our situation is to let it affect our routine. We don’t allow the situation to stop our lives. Our kids need stability and we try to set that example for them.”

“Some people ask, ‘How can you leave the house on a day like this?’ but keeping to the routine helps us maintain stability.”

Gali has applied lessons she has learned through the Western Negev movement to her work at Shatil, where she has been a consultant to social change organizations in southern Israeli for 13 years. She knows how to foster unlikely alliances and break the usual left-right divide. She has also brought her experience in crowdfunding to the organizations she works with at Shatil, and Gali also co-coordinates Shift, Shatil’s social change blog and podcast.

Gali would like to see more people realise that they can change reality and connect with social change organisations in their communities. That is the way, she believes, to make Israel a more just, inclusive, and egalitarian place.