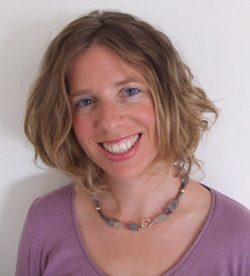 Hadas Ofek always knew she wanted to be a physical therapist. While studying for her BA and MA in neurological therapy at Tel Aviv University, she learned that physical therapy isn’t only needed by athletes or those in car accidents, but also by those ailing from brain damage. This includes victims of strokes, Parkinson’s, multiple sclerosis, and traumatic brain injury. While working at Lowenstein Hospital in Ra’anana, the largest rehabilitation center in Israel, she met families in need of rehabilitation services of all types who had to drive for hours multiple times per week from the north of Israel, where there were no adequate services.

“I moved to the Galilee and dreamt of making rehabilitation services there more accessible and professional, to give people the chance to make the best of their brain’s ability and get it back to what it was or as close to what it was when they were healthy,” Hadas says. “That way they can regain movement and participation and return to work, leisure, being part of the family, and getting back to what they want to do. Many people cannot realize their potential because they just don’t get the right services.”

When Hadas saw a notice about Shatil’s Northern Health Equity Leadership Project, she felt this initiative could be the one to bring her ideas to fruition. She was ready to find partners to help her change the landscape of healthcare in the Galilee – a region experiencing large gaps in healthcare services and status compared to the center of the country. This group of medical professionals, local government officials, educators, businesspeople, activists, and others were dedicated to pooling their resources and energies to improve health care in the North.

Together with the other participants in her rehabilitation working group, her plans include establishing a rehabilitation ward in Tsfat, and promoting planning for outpatient rehabilitation services throughout the region. The group also is engaged with the Clalit HMO in reviving their plan to establish a rehabilitation center in the Upper Galilee. During and after the Shatil training, Hadas also worked with others on creating standards for treatment, including limiting the distance a patient must travel for services and enforcing a minimum number of treatments per week. All this Hadas plans while pursuing her PhD at the University of Haifa.

Hadas quickly realised that the project she had joined provided an effective way of making change. Already, permits are in the works for several of her ideas. Hadas also organized two roundtable discussions between the most prominent rehabilitation experts in the country, and a draft for a northern regional program is in the works.

Hadas brought not only her endless energy and commitment, but also professional knowledge and experience to the newly created Shatil-led Citizens Forum for the Promotion of Health in the Galilee, a forum of health equity training graduates and others. “I am seeing myself in places I would never have been: walking into a mayor’s office, talking to him, inviting high level officials to meetings… it’s empowering. In our group, we made important connections that open doors … and that is very powerful.”