Meet Inbal Halperin: “Diversity is an asset, not a liability.” 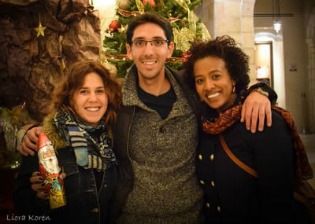 Inbal Halperin, a Jewish participant in Shatil’s training program called Lowering the Walls: Leaders Combating Racism in Jerusalem, remembers growing up in Jerusalem’s Armon Hanatziv neighbourhood and buying candy in nearby East Jerusalem in the Palestinian neighbourhood of Jabel Mukaber. “They were our neighbours and we weren’t afraid of them,” recalls Inbal.

“But returning from a recent trip abroad, I was suddenly aware of the hatred and racism seething in the city and a government in power that is fueling the conflict. Applying to Lowering the Walls… was a way for me to do something about it.”

Lowering the Walls brings together 25 influential Jerusalemites from an array of diverse sectors to study the phenomenon of racism, to learn new techniques for opposing it as individuals and as a group, and to create a network of leaders in Jerusalem working in different spheres. Currently, Inbal works for iJerusalem, which helps local entrepreneurs advance solutions for global challenges.

“What attracted me to Lowering the Walls was the idea that diversity is an asset, not a liability. How can we use the existing situation to move forward? The answer that came to me is connecting people. Because when different groups meet, fear melts.”

Just one month into Lowering the Walls, fellow participant Tali Isya invited Inbal to her family celebration of the Ethiopian holiday, Sigd. When Inbal regretfully could not accept the invitation, Inbal and Tali had an idea – to create a home-hospitality, multi-cultural winter holiday celebration in Jerusalem during Hanukah. So just three weeks before Hanukah, Inbal, Tali and a mutual friend sat down for a brainstorming session. Quickly, they drafted an event webpage (Open Holidays), and began networking with all kinds of people who might want to open their homes to the public. They came up with 11 hosted events to take place during the eight days of Hanukah – from a personalized tour of Christian sites in the Old City, to candle-lighting in the home of a Satmar Hassidic family, to a visit to a Muslim home in the East Jerusalem neighborhood of Beit Hanina.

Says Inbal: “It really is amazing to see how much we all have in common – even small things like discovering that Yochi, our Satmar Hassidic host, shares my love of shopping in the Mahaneh Yehudah open market on Friday mornings.” Both Inbal and Yochi even treat themselves to a special macaroon from the same market stall.

Inbal appreciates the opportunity that Lowering the Walls has given her to delve further into racism and its roots. “It’s not enough to believe in something, you need to be informed. I think Shatil has shown a lot of courage in tackling the subject of racism – people are too ready to jump to the solution before really opening it up. You can’t change something if you don’t understand it deeply,” she says.