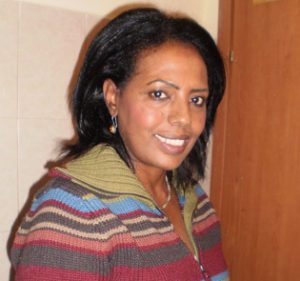 Inbal Rada trekked the scorching Ethiopian desert with a baby on her back wondering how – or even if – they would survive to reach Israel. Once they finally arrived, safely, to Israel, Inbal thought her struggles were over. She did not imagine that, years later, her life would be dedicated towards fighting racism against Ethiopian Jews and working to keep the community’s children safe from police brutality.

Today, Inbal is a busy woman. In addition to her job as head nurse in her hospital’s orthopedics department, she serves as a councilwoman in Ramle, and though her role in Temarach — the Shatil-led forum of Ethiopian-Israeli city council members — Inbal works with local police and community youth to reduce police brutality and the high incidence of youth arrests.

According to the Israel Prison Service, Ethiopian youth make up more than half the inmates in the country’s youth prison and are detained at a rate nearly 12 times higher than youth in the general population.

Last Monday Israeli Police Chief Roni Alsheich publicly defended his officers for regularly stopping Ethiopian Israelis – and especially youth – on the streets, saying it is “natural” for police to be more suspicious of Ethiopians.

On one of Israeli radio’s most popular news broadcasts, Ziva Mekonen-Degu, head of NIF grantee Israel Association of Ethiopian Jews, commented that “this is a black day for the nation of Israel.” He also called for Alsheich to be dismissed.

But Inbal Rada was not surprised.

“He’s just honestly describing the situation as it is,” she told NIF News. “It’s sad and painful, but we’ve known for years that this is what goes on.”

Shatil’s Gidon Ambaye, who guides both Temarach and the Ramle Activists for Social Change, a group of Ethiopians-Israelis working to improve the lives of their community, agrees.

“Many people in the upper echelons feel this way, they just don’t express it. I’m not angry at Alsheich for telling the truth. No matter how sad, we have to cope with it.”

In an effort to reduce arrest rates as well as police violence against Ethiopian youth, the Ramle activists are working to transform relationships with local police to turn them into constructive partners and even allies. They established a dialogue, and police have addressed the activists and appeared at a special conference for Ethiopian-Israeli youth in August.

Rada says the youth – who often have trouble sitting still – were glued to their seats during the conference, listening with especially rapt attention as panelists spoke about ways young people can avoid arrest when approached by police on the street, as they too often are, as well as the rights and responsibilities of all citizens in these circumstances. Participants asked for another such event and the activists are planning to involve parents next time.

“I’m an optimist by nature,” said Inbal. “But I see how our youth react to the racism and rejection, the many comments on social media that say, “Go back where you came from.’ These kids were born here. They don’t even speak Amharic. After dreaming all our lives, we finally made it here. And now we ask ourselves, ‘How can this be? This is Am Yisrael?’

“I love this country and I know that state tries with its many programs. What is needed is not another program but education from the earliest ages….I don’t know what will be. We have a long road ahead to create change.”