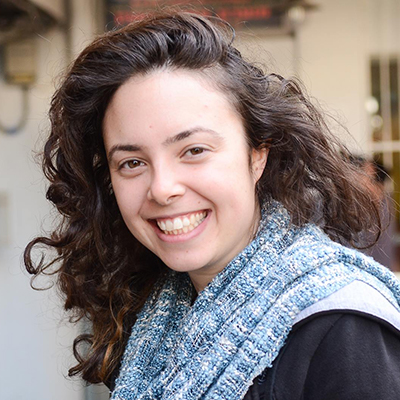 Twenty-two pioneering activists, including a Haredi man from Yerucham and a religious Muslim woman from Wadi Ara, gathered at Kibbutz Netiv Halamed Hey at the beginning of February. They represented different grassroots efforts to save Israel’s environment. The activists gathered to learn new strategies from Shatil as well as from each other.

“The retreat inspired us, gave us new tools and helped us focus,” says Noa Kozak, 27, a co-founder of Robin Food, a Haifa initiative that encourages Israelis to creatively reduce food waste, a problem common to developed countries. In the U.S. a full 40% of food is wasted and in in Israel, 35%.

Noa was inspired to work on food waste when, on an assignment for film school, she came across a lone activist using social media to raise Israelis’ awareness about food saving techniques. Noa decided to found local food sharing groups to encourage people to share their surplus food. Thousands joined.

The next step was Robin Food, an initiative which collects produce that would be tossed by retailers. Robin Food hosts monthly events for hundreds of people with a menu envisioned by a local chef and created completely out of rescued ingredients.

“People are shocked” that such delicious meals could be made from discarded food, said Noa.

With Shatil’s guidance and the Sheli Fund‘s support for environmental initiatives, Robin Food tripled the number of volunteers involved. They are about to sign a contract for a pay-what-you-can café based on rescued food that will also serve as a community center with performances, lectures and workshops on sustainable living.

“Shatil’s consultants are amazing,” said Noa. They give us so much. “Michal Shani, 40, who also attended the retreat, has also turned her life upside down through her environmental activism. After 15 years in hi-tech, she wanted to live a simpler life closer to nature. She quit her job, began to buy less and tried not to set foot in a supermarket.

“I’m discovering how much I’m not dependent on the systems that I thought I couldn’t live without,” Michal said.

In addition to reducing her environmental footprint, Michal also wanted to give back to the planet. She began volunteering in Israel’s first food forest – a concept that is catching on worldwide in which people plant forests that provide food, firewood and building materials to a community. These forests also improve air and soil quality as well as biological diversity. Today Israel boasts dozens of food forests and local authorities have begun sponsoring them.

The National Food Forest Forum, of which Michal is a part, receives guidance from Shatil. “Shatil taught us to set goals and objectives, to prioritize, to delegate responsibly, and is now teaching us how to fundraise in order to make the Forum sustainable,” she said.

This retreat in was particular was useful for Michal. “The panelists presented a model of collaboration from a variety of groups and individuals with different ideas and strategies. People put their egos aside and an unintended movement was born,” she said. “I found Shatil to be an organization that really cares about social justice and that helps connect and support all the people who work to make Israel a better place.”