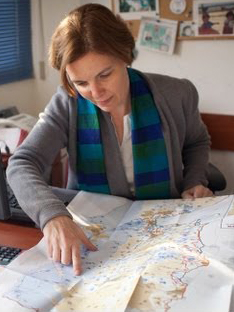 “The Israel that you see when you come on Year Course when you’re 17 is beautiful and powerful and attractive and I fell in love with it,” says Jessica Montell with just a touch of cynicism born of years of working in Israel’s human rights community.

Montell’s lifelong love of Israel started during her childhood years in Berkeley Young Judea and increased on the movement’s gap year program in Israel.

Her powerful tie to Israel propelled her here again after college where she found an internship through Shatil at Hamoked – the Center for the Defense of the Individual, which provides legal aid to Palestinians in East Jerusalem. She decided to get a master’s in international affairs with a focus on human rights at Columbia University.

Then she got a call from B’Tselem, asking her to join their staff.

After 19 years at B’Tselem, 12 as its director, Montell took a step back. The Swedish Consulate in Jerusalem gave her a year-long fellowship. The result was an analysis of the impact of Israeli human rights organisations that was published in Human Rights Quarterly.

When she presented her findings to the human rights community in Israel, Montell says their response was indignation. “They said, ‘how can you say we’ve been successful when the occupation is stronger than ever?’”

At that point, she realised something. Israel’s influential human rights organisations didn’t have a plan to end the occupation. It was not their agenda. And the organisations that were working toward ending the occupation were smaller and not well coordinated.

“As I was finishing this year of reflection, the 50th anniversary of Israel’s military rule over the Palestinians appeared on the horizon,” Montell says. “I saw this anniversary as a neon warning sign to anyone who cares about Israel’s future – and an opportunity to shake Israelis out of their complacency.

“What has allowed us to be a Jewish democratic state ruling over two million Palestinians? The fact that the occupation is temporary. But 50 years doesn’t sound temporary anymore.”

A serendipitous meeting with Prof. Daniel Bar-Tal, who had just founded Save Israel Stop the Occupation (SISO), led to a job running the fledgling organisation. Together with Shatil, SISO recruited 40 organizations into a 50-Out network to stimulate discourse, raise public awareness and to amplify, coordinate and publicise events about the Jubilee anniversary of the occupation.

“It’s been great to partner with Shatil,” says Montell. “You need to be smart, experienced and sensitive to facilitate the conversation between these various groups, to understand the nuances of the tensions and to find a way to overcome them to build a partnership. This is Shatil’s strength.”