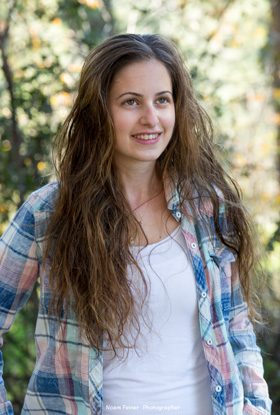 Ronny Shapira Chisdai is an advocate for women and social justice in Israel. But her path to activism is not your typical tale. Ronny grew up in a deeply religious Zionist home in Jerusalem. Adherence to strict gender norms and traditional religious ideology were part and parcel to her upbringing. But for the budding feminist the contradictions between what she saw around her and what she felt and wanted loomed large and painful.

“From a very young age I had questions and doubts that I couldn’t articulate. I just knew I felt I didn’t belong,” says Ronny. “From the age of 10, what I most wanted was to not be religious.”

However, when she tried living as a secular person, she found she couldn’t.

Ronny has always felt a great deal of love for Jewish learning – her mother has a doctorate in Talmud. Midrashim were read and discussed at every Shabbat meal. “The conversations between the sages were very present in our home.”

“The religion was too important for me to be able to give it up,” she says. “I was too tied to the texts, the tunes, the meanings, and I couldn’t discard them. They are part of me.”

By the time she got to university, Ronny felt lost and confused. She tried studying psychology in an attempt to understand what bothered her so much about her religion, why she felt she didn’t belong, and what world view she wanted to adopt. But she didn’t find answers there. So she switched to sociology, and suddenly many things became clear. Through her courses on religion and society and the history of religious Zionism, she finally understood the context in which she grew up, why she felt disconnected, and understood that she could remain religious – but in a different way.

Her background in qualitative research led her to graph the spectrum that exists in Jewish religious life. As she saw it, she grew up on one side of that spectrum where there is one absolute truth and everyone must toe the line. On the other side was a more universal, liberal view.

“This division also speaks to where we put the boundary between ourselves and the other: We can have the attitude that he who is not us is not OK, or we can lower the boundary, have more openness to the other, to learning and understanding from him.

She realized, in other words, that there can be shades of grey.

This applies to her evolving understanding of the role of women as well.

“For generations, the men in my family were beadles [lay officials], led prayers, were the ones who organized things in the synagogue. And I was stuck in the women’s section. In my school, girls didn’t learn Talmud. I saw that on the other ‘side’ there is a struggle between tradition and equality for women. I didn’t know this other way of looking at Judaism existed. I didn’t know it was possible.”

Between her BA and MA studies, Ronny discovered the Ein Prat Seminary and spent a summer there studying Jewish texts.

“My whole life, I felt that the door to the Beit Midrash [Jewish house of study] was blocked to me, but in Ein Prat I discovered a deep and serious place that not only accepted women but invited them. And women taught there. If until then all the books of Judaism were closed to me, there I plucked up the courage to open them anew….I discovered that I loved learning Talmud, that it was fun. It was the closing of a circle, something I had always wanted to do and I finally did it.”

A new world had opened for Ronny.

“I discovered there was another way to be religious, that I could find a religious world where I could feel comfortable, where I belonged.”

Ronny’s journey led her to want to join the movement for social change. “I wanted to be involved in activity that would lead to change the things that always bothered me. I wanted to give people the tools for change.”

This led to an M.A. in organizational sociology and her involvement in a Shatil course sponsored with Bet Hillel that provided tools for social activism in the realm of religious freedom.
“I didn’t know what Shatil was,” says Ronny. “But I wanted these tools. And the course proved to be very meaningful for me. What most burned in me was the change needed on Jewish women’s religious status and through that course I met activists and organizations right here in Jerusalem working on just that issue like [the NIF grantees] Ne’emanei Torah V’Avoda, Mavoi Satum and Kolech. I was so inspired. I knew I wanted to be involved in this work.”

When the opportunity arose to do her practicum at Shatil, it felt very natural. Afterwards, Ronny was offered a job in Shatil’s religious freedom project, where she works to support women on religious councils, Haredi women activists, and a project called Lowering the Walls course, which gave anti-racism tools to Jerusalem leaders.

“I am in a place where I can work to change all those things that pained me, that bothered me and that alienated me for a time from Judaism,” she says.

“I live with a lot of complexity today,” Ronny continues. “The transition from the world I grew up in to the world of Shatil is a major one. I never for a moment forget that 10 years ago, I was an ulpana [religious high school] student in a skirt that swept the floor and an orange top, handing out stickers against the disengagement from Gaza. Both identities are a part of me.

“Today, maybe you don’t see my religion on the outside, but it’s very strong in me and it very much guides my work. It also gives me a common language with the groups I help to guide.”

Ronny’s values and background, her journey and her present, still collide on a daily basis. And she accepts that.

“It’s part of my work and my life and I am learning to love it.”