Mobilizing for the Lives of Women 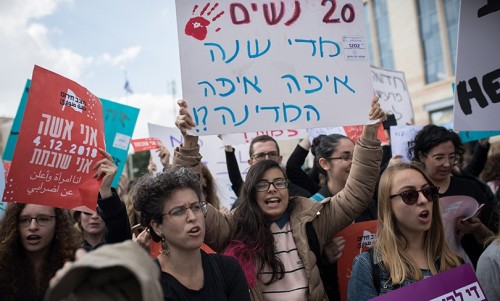 Over 30,000 demonstrators gathered in Tel Aviv’s Rabin Square last week to protest the Israeli authorities’ failure to take action on violence against women, which has seen a sharp increase in recent months.

The protest rounded off a day of action, during which thousands went on strike and rallies were held across Israel, to protest the deaths of 24 women killed since the start of the year by a partner, family member, or someone else they knew.

Ayala Itmar, whose sister was killed by her husband in 2003, called on the authorities to take action on the issue, saying, “The State of Israel must invest in budgets, resources, and professionals who will deal with violent men, and develop safeguards for women to ensure their safety in times of distress.”

Earlier in the day, hundreds of protesters blocked Tel Aviv’s Azrieli intersection, a major junction near the Defense Ministry and IDF headquarters, with opposition politicians in attendance. “There is a plan,” said Opposition Leader Tzipi Livni, “The government just needs to take it off the shelf and implement it.”

In a statement released the previous day, the organisers demanded “the transfer of the NIS 250 million budget promised a year and a half ago for the emergency plan to prevent violence against women,” and called for additional educational and rehabilitation programs to combat domestic violence.

Dozens of NIF grantees including the Israel Women’s Network (IWN), Zazim — Community Action, Omdim Beyachad (Standing Together), and Women Against Violence were part of the organising coalition of groups. Additionally, the New Israel Fund gave the coalition specific grants to organise the strike and the main demonstration in Tel Aviv, the largest ever women’s protest in Israel. NIF is proud to have been a part of this historic day of protest, and we are committed to continued support for groups promoting women’s equality, freedom, and personal safety.

“Today we made history,” the organisers of the protest told the crowd. “Today the silence on violence against women has turned to screams.”