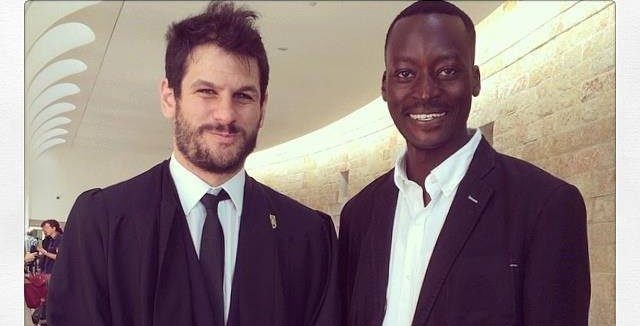 Following lengthy legal action, Attorney General Yehuda Weinstein has ordered the release of Mutasim Ali. A Darfuri refugee who has been held at the Holot detention centre since May 2014, Ali is a prominent leader in the asylum-seeker community in Israel. This is a major victory for the human rights of refugees in Israel.

Ali requested asylum more than 30 months ago. When the state didn’t respond, he decided to pursue the matter in court, where he was represented by NIF grantee Hotline for Refugees and Migrants. Ultimately, Hotline not only secured Ali’s release but also forced the government to admit that it had not formulated a policy on Darfuri refugees.

Shortly after his release, Ali met our New Gen fellows and inspired them with his personal story of fleeing, persecution for his political beliefs and his visionary leadership of the asylum seeker community in Israel.

In an interview with Haaretz, Ali said, “They say it’s [Holot] an open facility. It’s not an open facility; it’s a jail, not a refugee camp. They put a person in the desert, in a place he can’t leave … There are no health or education services; it’s forbidden to learn Hebrew. In what refugee camp would they forbid you to learn a language? The aim is to put people there and embitter their lives even more, just so they’ll agree to return [home].”

While Ali is happy to have been released, in a Haaretz interview following his release, he noted “this happiness is not complete”. He expressed confusion and dismay that while he had been released, 1,700 fellow asylum seekers were still being held in Holot.

He emphasised that for change to happen, “the issue of migrants and foreigners in Israel has to be, first of all, an Israeli struggle before it becomes an asylum seekers’ struggle. This poses an important question: how does Israeli society want to look in the future? Does it want to turn into a closed, intolerant, racist society, where hate crimes and xenophobia are rife? Or does it dream of being an enlightened, humane and moral state?”

Mutasim’s questions are important ones, and it is for these reasons that we continue to work for just and fair treatment of asylum seekers in Israel.