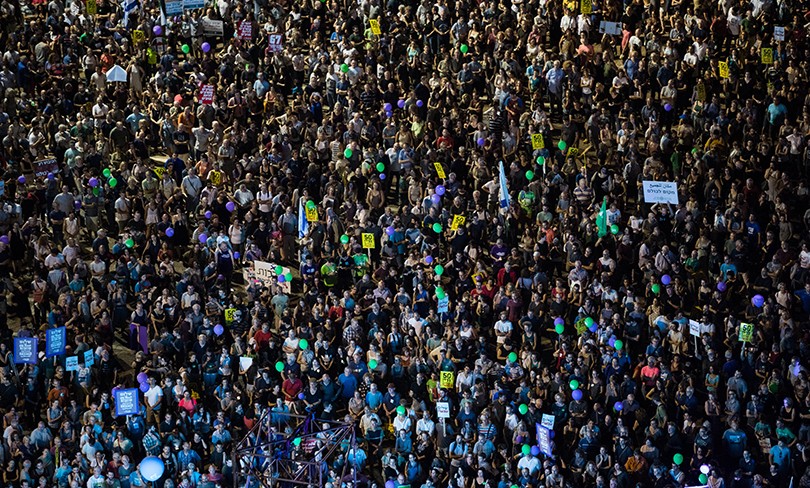 Tens of thousands of Israelis crammed into Tel Aviv’s Rabin Square last Saturday night for a Druze-led rally to protest the Nation-State Law. Opposition has been growing since the law passed a couple of weeks ago. The law favors Jews and Judaism over Israel’s non-Jewish minorities, in contrast to the guarantees of equality enshrined in Israel’s Declaration of Independence. Prime Minister Benjamin Netanyahu and the far right’s immediate response to the widespread public criticism in Israel and abroad and the growing demonstrations has been, as usual, to attack the New Israel Fund.

As Haaretz’s lead editorial put it earlier this week, “The aim of Netanyahu’s incitement is clear: to undermine the legitimacy and authenticity of the Druze protest against the Nation-State law. The prime minister portrays the Druze as a herd of fools led by “the left” and the New Israel Fund – as a code name for the “internal enemy” that acts to undermine the state in general and him in particular. Netanyahu thus mocks the pain and insult felt by the tens of thousands of people who filled the square Saturday night.”

“Incitement against the New Israel Fund is also present in the Likud response to the failed meeting: “It’s unfortunate that leftist elements, first and foremost the New Israel Fund, are making cynical use of issues related to the Druze community, just for the purpose of political battering.”

Criticism of the National-State Law has also come from the right, led by President Reuven Rivlin who said that the law is likely to harm the Jewish people. Even right-wing journalists who typically disagree with NIF have come out in strong opposition, including Yediot Achronot’s Ben-Dror Yemini and Netanyahu’s former Director of Communications Yoaz Hendel, who both have said that the law must be repealed or amended.