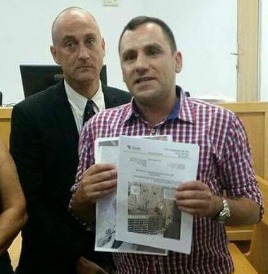 The District Labor Court handed down made a precedent-setting decision against SLAPP (Strategic Lawsuits against Public Participation) cases last month.

At the start of 2016, Reuven Ben-Shimon founded the Forum against Work Accidents, a grassroots group of safety experts and construction trade professionals. As part of their work, they published the names of companies at whose sites workers have been killed or injured, along with additional information about the victims, accidents, sites, and companies.

Their efforts led to greater media interest in the issue and new legislation. The companies responded by trying to prevent publicity about these injuries and their responsibility for them, using litigation and media pressure.

Ben-Shimon had been employed as a Safety Officer by Shikun u-Binui Solel Boneh. He had a falling out with the company after he and other safety officers complained about safety lapses that were not being addressed (and which led to work accidents), abuse of workers who reported safety problems, attempts by the company to alter safety reports, and sexual harassment of workers.

In March 2016, bowing to the immense pressures exerted on him, he signed a “silence agreement” with the company terminating his employment, under which he received a severance package.

In September 2016, the company sued in the District Labor Court, asking that the agreement be nullified and that Ben-Shimon return all the money he had received and the documents in his possession and be barred from making any use of them. The company also alleged defamation. Ben-Shimon filed a countersuit against his dismissal. Last month, the court approved a settlement agreement, in which Ben-Shimon will receive NIS100,000 for court expenses and NIS360,000 compensation.

This is a precedent-setting decision which NIF hopes will serve as a deterrent from future SLAPP cases. In an interview with NIF, Ben Shimon said: “Don’t be afraid to publicize SLAPP cases, and don’t hesitate to let good organizations like NIF and others support you. Publicizing the legal demand can help transform the case against you into a case against those trying to silence you, and that’s why my lawyers rushed to file a petition against Solel Boneh – in order to transform the balance of power.”