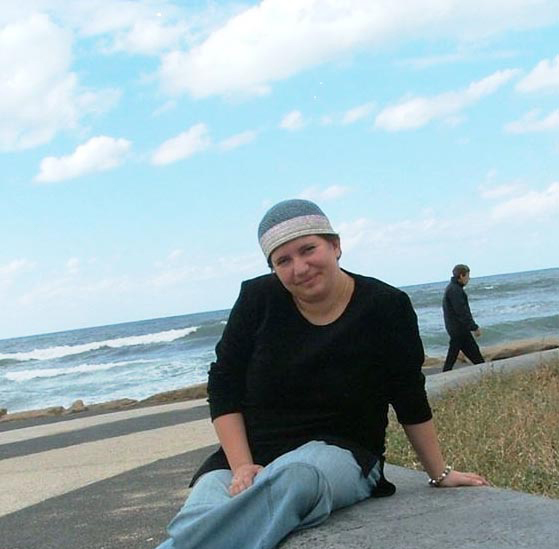 Two weeks ago on Shabbat at Jerusalem’s Kehilat Zion synagogue, Nadia Aizner stood with glistening eyes under a canopy together with her partner Lena Kuznetsova, holding their newborn daughter, Tair – a name that means “she will light.” The palpable emotion among congregants was a testament to Nadia’s ability to publicly hold both her devotion to Judaism and her identity as a lesbian.

Unexpected junctures punctuated Nadia’s life-journey. She is the daughter of secular parents from Minsk, Belarus. She was married to a man, and maintained a dati-leumi (national-religious) marriage. Today she is partnered in a civil union with a woman and is the mother of six children. She remains Orthodox.

Nadia remembers feeling drawn to Judaism even before religious expression became acceptable in Belarus, “As life became more open and free, I had better access to books on Judaism and I found myself really connecting to the mitzvot and the traditions.”

Then a year after Nadia arrived in Israel, she chose a religious high school for herself, Ulpana Tiveria, where she found kindred spirits and inspiring teachers. It was years later, once Nadia had married and started a family, that she returned to her childhood passion of writing poetry and prose. She began to explore the Internet more. In that way, she gradually understood more about herself.

“It took me several years to come out of the closet to myself, and then a few years more to get divorced,” tells Nadia. “And along the way, I explained these changes as well as I could to my children. Keeping the lines of communication open has been key for us.”

Nadia found an important home in NIF grantee Bat Kol, an organisation for religious lesbians, where she could express her activism, particularly at the Religious Tolerance Day on Pesach Sheni(second Passover), an initiative started by religious LGBTQ+ groups to acquaint Orthodox people with LGBTQ+ people from their communities.

Says Nadia, “Shatil and NIF have played a big part in our outreach to Orthodox communities, in supporting and guiding Bat Kol and Havruta.” Havruta is an organisation for Orthodox gay men.

This year, Shatil and local groups expanded Pesach Sheni outside Jerusalem to another 15 locations throughout the country, reaching over 1000 people, many of whom had never previously listened to a religious member of the LGBTQ+ community.

Nadia feels particularly passionate about Shoval, the educational arm of the religious LGBTQ+ movement, who together with Shatil, launched a website with educational resources on LGBTQ+ issues for religious schools and youth organisations. The religious scouts, a group with a membership of over 85,000 young people, is already using the material.

“Teachers in the religious sector need to know that being informed may save the life of an isolated teenager in their class,” Nadia says.

“A lot of people woke up when (16-year old) Shira Banki was murdered at the Jerusalem gay pride parade two years ago. It made even more progressive religious people come out in support of us.”

“We’ve started a revolution and there’s no turning back the clock,” says Nadia.