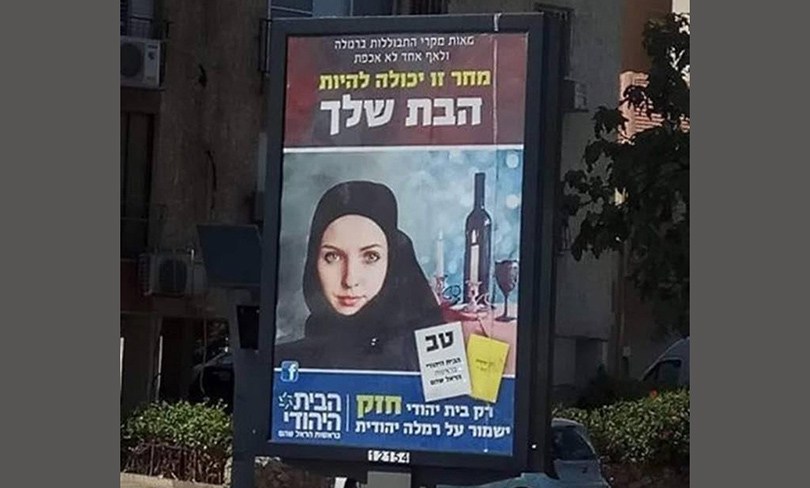 A municipal election poster campaign by the national-religious Jewish Home party was halted last week, after widespread condemnation that the wording and image was racist. The poster warned of intermarriage between Jews and Arabs.

The posters, in the mixed Jewish-Arab town of Ramle, featured a picture of a young woman in a hijab against a background of the candles and wine cup used on Shabbat. The image was accompanied by wording which said, “Tomorrow it could be your daughter. Only a strong Jewish Home will maintain a Jewish Ramle.”

The campaign launch followed the wedding of well-known Arab-Israeli news anchor Lucy Aharish and Jewish actor Tsahi Halevi, star of the international TV hit “Fauda,” which itself brought attention to this issue and led to heated debate.

Opposition MK Neven Abu Rahmoun of the Joint List responded, “It seems that, for certain parties, incitement is the only tool for persuasion. The local election period is contaminated with that same incitement that the government encourages, and to my great regret, it is not surprising.”

Tag Meir, an anti-racism activist group supported by the New Israel Fund, issued a statement condemning the posters and asked, “How would we respond to a notice against Jews which was published in Poland or Hungary?”

Ron Gerlitz, Co-Executive Director of Sikkuy: The Association for the Advancement of Civic Equality, said that “the candidates for the Jewish Home party and their advertising advisors are prepared to incite against the residents of Ramle, to escalate the [tense] relationship between Jews and Arabs in the city and even to turn it into violence, in an attempt to gather a few more votes.”

MK Yousef Jabareen (Joint List) sent a letter to Attorney General Avichai Mendelblit demanding that the parties who posted these posters be prosecuted or disqualified. After residents destroyed most of the posters in protest on Wednesday, the campaign was stopped by the advertising company who owned the merchandise for these signs.

It was the latest in a series of controversial campaign incidents by various parties running in Israeli municipal elections scheduled to take place next week.

The Association for Civil Rights in Israel, the New Israel Fund’s flagship grantee, issued a statement saying that “local elections are bringing the racists out of their holes to an unprecedented extent. Now racism is also rising in Ramle. These campaigns are not anonymous. They are signed openly by parties whose representatives sit in the government. Do any of you really want to live in a city where representatives of the council are chosen in a campaign that marks your neighbor as a dangerous enemy?”

Photo Credit: Sikkuy: The Association for the Advancement of Civic Equality