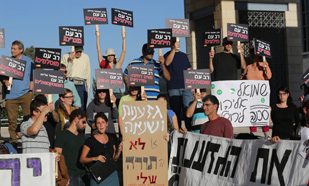 Earlier this week, the avowedly racist Chief Rabbi of Tzfat, Shmuel Eliyahu, failed in his bid to become Sephardi Chief Rabbi of Jerusalem. His defeat follows an intensive, months-long campaign against his candidacy led by the NIF-convened Tag Meir coalition.

Rav Eliyahu has made a number of racist and discriminatory comments towards Muslims, Christians, secular people, and the LGBT community. “When it comes to Arabs,” he said, “norms of violence have become the ideology.” He also gained notoriety when he issued halachic rulings prohibiting the sale or rental of homes to Arabs. Uri Regev, head of NIF grantee Hiddush (part of the Tag Meir coalition) remarked: “These objectionable positions towards democracy and the institutions of the state, the Jewish people, and regarding people of other faiths and their rights, are thankfully not mandated by halacha, and many in the rabbinate do not share them.”

Tag Meir organized a petition against Eliyahu’s candidacy and on the day of the vote, they held a protest outside Jerusalem’s city hall. Earlier this year, NIF organized a letter in which hundreds of American rabbis also voiced their concern regarding the prospect of Eliyahu being appointed to such a prestigious position. Of the 48 electors, 30 supported another Sephardic candidate.