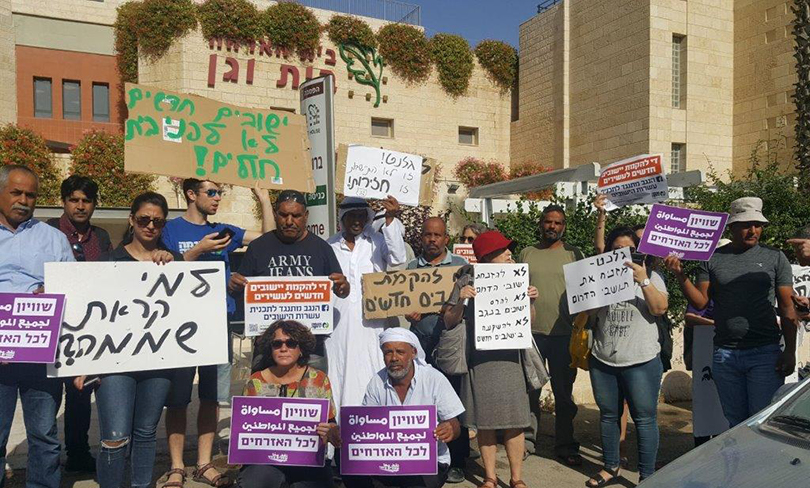 On Monday, July 23rd, Shatil and partners celebrated a victory at the Subcommittee for Planning Issues that was discussing Housing Minister Yoav Gallant’s plan for six new Jewish settlements in the Negev.

Instead of strengthening neglected Jewish towns and Bedouin villages in the Negev, the state wants to spend money on creating new Jewish settlements there. Shatil, other civil society organizations, Negev Bedouin activists and others have been fighting this plan for years.

The settlements were to be built partially on Bedouin land, including that of Bir Hadaj, a recognized town on the Egyptian border, home to 6,000 Bedouin citizens of Israel. The plan would have prevented Bir Hadaj and other Bedouin communities from growing. Shatil — together with Green Course, the Society for the Protection of Nature in Israel, Women for Public Housing in Dimona, Omdim Beyachad (Standing Together), Bedouin MK Said al-Harumi, and a bus load of activists — persuaded the planning committee to recommend that plans for three of the proposed settlements be scrapped. And on August 7th, 2018, the National Planning Council formalized the committee’s recommendation.

“These new settlements are not meant to strengthen the Negev, but to weaken the Bedouin,” said a Jewish activist at a protest against the planned communities.

This achievement demonstrates the effectiveness of Shatil’s strategy to guide and strengthen the Bedouin community’s ability to partner with diverse Jewish and Arab groups and to influence mainstream policy-making bodies.

“The work of this ad hoc coalition and the joining of all these voices — the honed communication skills of Green Course, and the fury of the Bedouin who presented a well-reasoned and documented argument based on a Shatil position paper on the illegality of this move — led to this success,” said Sultan Abu Abaid, Shatil Director of Palestinian Society.