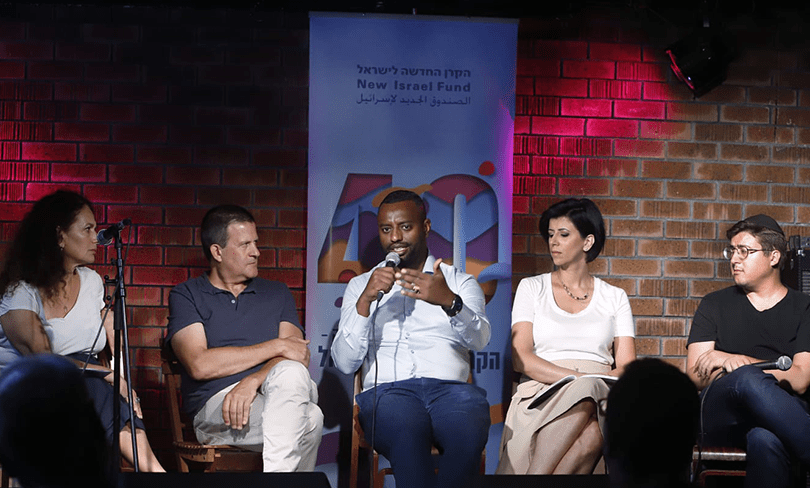 Over 100 people attended the New Israel Fund’s panel on policing and policing violence on this past Monday night in Tel Aviv. The subject of police brutality has been a critical conversation in Israel following the killing of unarmed Ethiopian Israeli teenager, Solomon Tekah, by an off-duty officer in June.

The event was also the official launch of a new book “Policing Citizens – Minority Policy in Israel,” by Prof. Guy Ben-Porat and Fany Yuval of Ben Gurion University of the Negev and published by Cambridge University Press.

The book explores Israel Police behavior towards four minority groups: Arabs, Ethiopian Israelis, ultra-Orthodox Jews, and Russian-speaking immigrants. Prof. Ben-Porat found that over-policing had claimed the lives of 42 Israeli Arabs since and including the October 2000 demonstrations. Solomon Tekah was the second young Ethiopian Israeli killed by police this year.

But paradoxically, Prof. Ben-Porat also found that these communities suffered from under-policing. “As proof of the discrimination against them, Arab citizens often cite not only the failure of police to prevent the escalation of violent crimes in their communities, but also the fact that so many murder cases remain unsolved.”

Until a generation ago, traditional Israeli Arab societies had their own internal mechanisms for dealing with crime and the police were unwanted. But modernization has broken down these mechanisms and left a vacuum which must be filled by the police – a challenge because only 18% of Israeli Arabs trust the police. Prof. Ben-Porat observes that this is a similar challenge posed by the police force in the US, where in minority groups like the African American community, there is a desire for more resolute law enforcement but complete mistrust of the police.

Similarly, Israel’s Ethiopian community holds wariness towards law enforcement, with 20% of the community strongly agreeing that “police stopped or arrested people in their community for no reason,” and 22% strongly disagreeing with the statement “police treat people fairly” – also, higher than any other group.

Nevertheless, Prof. Ben-Porat is hopeful that the situation will improve. “We are seeing the rise of a new generation of Ethiopians. On the one hand, they are very patriotic and talk a lot about their military service. But on the other, they’re not afraid to talk about racism in Israeli society.”