On Sunday,  hundreds of Israelis gathered with Tag Meir for a demonstration against racism and hatred at the site of the torched bilingual school. The Max Rayne Hand in Hand School was, on Saturday, the site of vandalism and an arson attack.Over 300 people gathered to show support for the anti-racism campaign and for the pupils and teachers affected by the attack. The group rallied under banners in Hebrew and Arabic reading “Spread light instead of terror” and “No to hatred, no to racism, yes to coexistence, yes to partnership.” Tag Meir is an NIF-convened coalition and the leading organisation responding to hate crimes in Israel.

The anti-Arab graffiti spray painted on the building sat the damaged Jerusalem Hebrew-Arabic school read  “Death to Arabs,” “Kahane was right” and “down with assimilation.” “There is no coexistence with cancer,” read another tag spray-painted on a wall.

Nadia Knane, the school’s headmistress, has confirmed that a Year One classroom has been badly damaged by the fire, and that the attackers had tried to set alight another classroom. 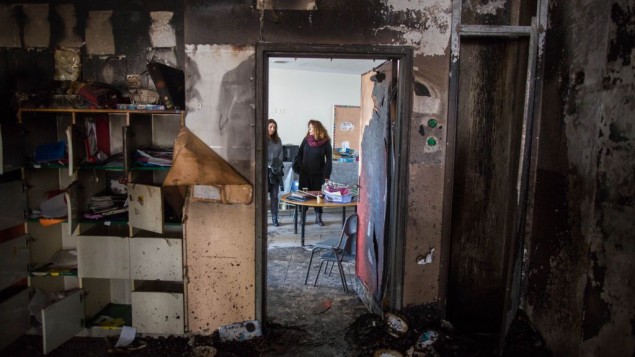