Your Visit Strengthens Us 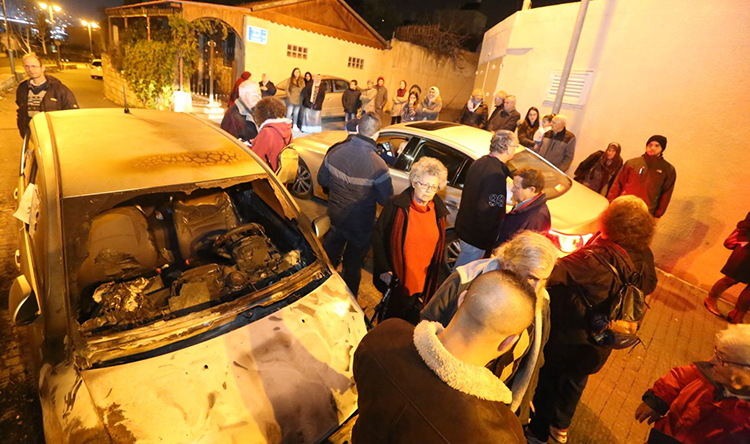 Beit Safafa is, by any standard, a nice part of Jerusalem. Home to hundreds of relatively well-off Palestinian families, the village is known to Jerusalem as a tolerant and welcoming community. The Jerusalem Hand-in-Hand school, with its Hebrew-Arabic curriculum, is next to Beit Safafa, and a popular walking and biking path along the old Jerusalem train tracks extends through the village. For most of the town’s recent existence, it’s been a quiet and safe place to live.

But Beit Safafa’s calm is regularly punctuated by vigilante “price tag” attacks by Jewish extremists, so called because of the price exacted by extremist Jews, often when the government acts against illegal settlement outposts in the West Bank. Early on Friday, January 26, a car was burned and “Death to Arabs, price tag” was spray-painted in Hebrew on a wall. In late December, a Palestinian’s taxicab was burned to its wheels by a Molotov cocktail, and another Molotov cocktail was thrown into a house, fortunately flaring out before doing damage. The police quickly decided that the motive for that attack was personal, not nationalist.

But those with the most experience responding to price-tag attacks aren’t sure.

“Beit Safafa is under attack,” said Gadi Gvaryahu, Chairman of the Tag Meir organisation, at a neighbourhood visit on January 29 in response to the torching. “Whether criminal or nationalist, we cannot tolerate this in a Jerusalem neighbourhood. It wouldn’t happen in [the Jewish neighbourhood of] Rehavia – here, nobody takes it seriously.”

Tag Meir, seed-funded and supported by NIF, is a coalition of 51 organisations that responds to these hate crimes. Even on a cold January night, dozens of Tag Meir volunteers – and several children who attend the Hand-in-Hand school – turned out in solidarity with their Jerusalem neighbours.

Two Palestinians who were victimised in the recent attacks addressed the crowd. Mohammed Hijani, who owned the car torched last week, mentioned that both he and his wife Shirin worked in a hospital with both Jews and Arabs, and made clear that he saw dialogue and friendship as the only path going forward for all residents of Jerusalem. And Moussa Khattab, whose son Riyadh’s car was demolished last month, was very direct in his message.

“Your visit strengthens us,” he said.