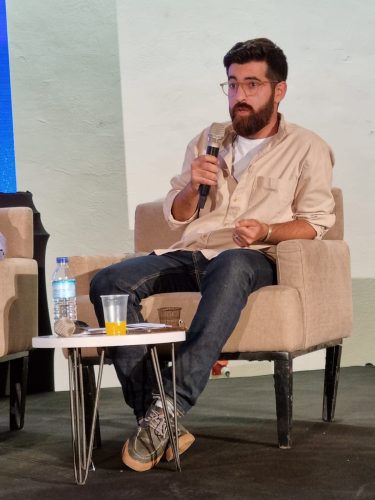 My name is Amal Oraby.

This week I’m marking 100 working days in the PR department of NIF Israel in the role of Arabic Media Coordinator, a role that has never previously existed.

These 100 days are far from being a grace period or a soft landing. Transition periods are never simple for me, but this time there was a double challenge, because it wasn’t just me who had to acclimatise to a new work environment, a new boss, and new colleagues in the department, but my colleagues who needed to adapt to a new employee, or to be more precise, a new Palestinian colleague.

The decision to include me in the department came in the wake of a simple yet unprecedented decision; unprecedented because only a few in the social and political realm arrive at it. The conclusion that brought NIF Israel to employ me was this: that an organisation that aspires to advance justice and equality in Israeli society can’t talk only in Hebrew to Jews, but rather has an obligation to create true meaning for concepts like justice, equality, and partnership, concepts that in the past few years have lost their resonance. This is also a way of giving true egalitarian expression in the Arabic language and among Arab society, a society with whom they want to build partnership.

This task gained urgency after the unrest of May 2021 and the build up to it – wild incitement which created huge damage to public opinion, for Arabs and Jews equally. It came to the point where the demand for revenge once again reared its ugly head, and many declared the impossible nature of shared society and shared living.

The temporary partnership that was created in the government, and the inclusion of an independent Arab party in the coalition, was relatively successful in turning Arab politicians into more legitimate actors on the Israeli political stage. It also made the Arab population less invisible, and their problems more prominent.

But in parallel it also raised new-old questions that until now had been comfortable to ignore, or simply enjoyed a Jewish consensus around them, which made grappling with them extraneous. Take for example decisions that maintain the regime of race-based separation in the Occupied Territories between Jews and Palestinians, decisions which in the past were automatically approved without proper public consideration. From now, they demand an Arab vote in the matter.

To be the lone Arab at an overwhelmingly Jewish table demands another role too, because in certain situations you find yourself the sole, exclusive representative of Arab society, the Palestinian people and the Arab nation. You’re called on to grapple with the institutional blindness that’s baked into the majority population, a reality which leads it to make decisions that entirely ignore Arab society or its real needs. At other times the opposite situation is true, and you’re required to come out with statements that challenge the identity and interests of your own people.

This role tests the self-confidence and resilience of any Arab because he or she needs to protect the balance between their right to be an influential and equal partner, and the demand that is made of them to accept the fundamental assumptions of the majority group, and to serve its interests.

Together with the staff team I learned that only through continuous, brave debate on the meaning of partnership for both sides, will we be able work together.

There needs to be a development of a new language that will act as a foundation for real partnership and doesn’t place the Arab in a position where they need to ‘speak Jewish’, by which I mean speak to the heart of the Jewish majority. And understand ‘Jewish’, by which I mean to learn and develop empathy for the fears and concerns that Jews have in their hearts. Rather, from the outset this new approach starts with the recognition that the Arab voice is legitimate even when it is different, and their opinion counts, even if it’s against what is being proposed. What’s more, harming the Arab soul, with attacks on history, cultural heritage, and elements of national and personal identity is unacceptable. You don’t need to look further than the ban on waving the Palestinian flag, the denial of the Nakba, and the denial of the threat of a second Nakba, to understand this issue.

A shared destiny is built on the assumption that we are not living in a dog-eat-dog world, nor are we all presumed to be angels, but rather we need to treat each other as humans, and with humanity.